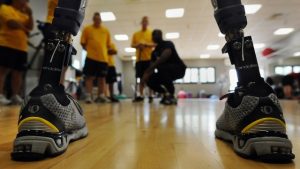 Researchers at George Mason University are working on a brand new type of prosthetic technology. Using ultrasound waves, scientists believe they can give people greater control over their prosthetic than ever before. This technology could do more than revolutionize ultrasound technology — it could change countless lives for the better.

Traditional prostheses for the arm and hand rely on electrical methods to sense muscle activity. To achieve this, electrodes are placed on the surface of the skin. The electrodes pick up electrical activity from the muscles in the residual limb when the amputee goes to perform a movement. Unfortunately, the electrodes have difficulty in telling the difference between the sheer number of signals from all the various muscles. This can understandably lead amputees to become frustrated with their prosthetics, opting to simply go without them rather than deal with all the complications.

The team at George Mason University is determined to change all that. Their research focuses on using ultrasound waves to sense muscle activity. Currently researchers are working on miniaturized ultrasound transducers. These are small, compact devices worn as bands on the forearm or under a prosthetic shell. The device can send and sense sound waves sent through the body. The signals are analyzed with computer algorithms, which in turn identify muscle activity. Not only does this method have the ability to pick up muscle activity from deep inside tissue, it is also capable of telling the difference between the various muscle groups. This is a distinct advantage of previous versions, as it allows the amputee greater dexterity when it comes to controlling the prosthetic.

But that’s only one project this team is working on. In another, the researchers are working on combining ultrasound technology with new types of exoskeletons. This work could help people with spinal cord injuries regain greater mobility and control.

Ultimately the team is looking to provide high-quality prosthetics that people will actually use, all for a lower cost than current models. The work is ongoing and requires more testing, but early results are incredibly promising.

“Our goal is to help amputees go about their daily lives with improved function.”

Siddhartha Sikdar, an associate professor in the Department of Bioengineering at Mason Engineering