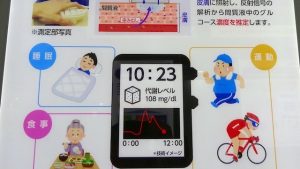 A new sensor that can determine the concentration of glucose in a living being using electromagnetic waves has been designed by Nippon Telegraph and Telephone Corp. This sensor has distinct advantages over current technology in the field, as it is non-invasive while still being accurate. Experts hope that this new technology could prove extremely useful for patients who need to closely monitor and manage their glucose levels.

In order to accurately use interstitial fluids to measure glucose concentration, researchers had to develop a completely new type of glucose sensor. This sensor uses two methods to provide an accurate reading of the glucose concentration of a body. First, the sensor irradiates the skin. To do this it utilizes electromagnetic waves. These waves are set to a frequency that is absorbed by the glucose components found in the body. The electromagnetic waves are then sent back to the sensor as a series of signals. The signals are subsequently analyzed by the sensor, providing scientists with an assortment of data.

Researchers demonstrated this new technology at the International Modern Hospital Show 2019 in Tokyo, Japan back in July. To show the effectiveness of their sensor, they employed a probe, which made contact with a specimen. Scientists then explained the data they had accumulated from the specimen, and how that allowed them to estimate the glucose concentration within the body.

Scientists intend to further explore this technology and hope to develop a wearable device that would allow patients to accurately and consistently track their glucose levels without having to bother with invasive procedures.