Ultra-Low Power Wi-Fi Connectivity for the Internet of Things 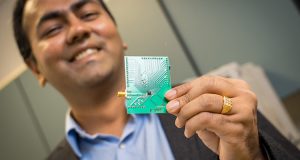 In the future, researchers believe this technology could be instrumental in increasing the power and interconnectedness of the Internet of Things (IoT).

The Wi-Fi radio lives on a computer chip, which is itself smaller than a single grain of rice. But its small size belies its power: this tiny device uses 5,000 times less power than its current counterparts, while still allowing the IoT to communicate with existing Wi-Fi networks at rates fast enough to stream music and even videos.

The Power to Communicate

The technology needs a mere 28 microwatts of power to get all this done, a dramatic reduction of the power normally required to achieve this sort of wireless communication. The device can transmit data at a distance of up to 21 meters.

“You can connect your phone, your smart devices, even small cameras or various sensors to this chip, and it can directly send data from these devices to a Wi-Fi access point near you. You don’t need to buy anything else. And it could last for years on a single coin cell battery.”

Engineers have long debated whether wireless technology could help usher in the next phase of the IoT. This new device requires very little power to operate, meaning users would not be hampered by the need for large batteries, external power sources, or inconveniently frequent power recharges.

The ultra-low power device is currently capable of reaching the range necessary to operate in a smart home situation, but engineers believe they are just getting started. The addition of a custom integrated circuit allows for backscattering data; this, in turn, means that the radio could be designed to be even smaller and more streamlined.

Engineers are hoping to expand the range of their Wi-Fi radio, as well as investigating the possibility of adding additional devices to the IoT that are not normally connectable due to power constraints. One day researchers believe they could have smoke alarms, methane detectors, and much more connected to the IoT.