Topological LC Circuits That Can Transport EM Waves Without Backscatter 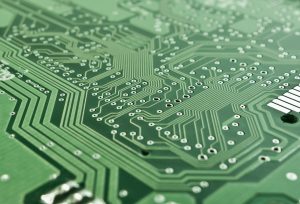 Image by Michael Schwarzenberger from Pixabay

Scientists from the National Institute for Materials Science in Japan have successfully fabricated a new type of topological LC circuit that can make electromagnetic waves without backscatter. Scientists believe that these circuits could potentially be used for high-frequency electromagnetic waveguides. These could allow for miniaturization of many technologies, as well as create high integration in an assortment of electronics devices.

Topological properties are extremely useful in a variety of applications, as their functions do not change even if the shape of the object does. Scientists have long suspected that these properties could prove useful for creating electromagnetic waveguides that would not be plagued by backscatter.

The team created a flat circuit called a microstrip. This device allows electromagnetic waves to attain topological properties after metallic strips are joined together to create a honeycomb pattern. It is imperative that the width of the intra-hexagon and inter-hexagon strip are not the same sizes.

Scientists then fabricated microstrips so that they could measure the electric fields found on their surfaces. By doing so, they were able to successfully observe the structure of topological electromagnetic modes. This proves that it is possible for electromagnetic waves to be induced from topological propagation — all without the complex structures previously thought to be essential.

Topological electromagnetic wave propagation is immune to backscatter, even when the pathways have sharp turns. This makes it possible for scientists to create compact electromagnetic circuits, which in turn could usher in a whole new age of miniaturized and highly advanced electronics devices.

Scientists also believe that the direction of the vortex, as well as the associated vorticity, could be used as new data carriers for high-density information communications. Topological electromagnetic modes are known for specific vorticity, or local spinning motion of a continuum near a specific point, but scientists have struggled to properly utilize it — until now.

The team behind these innovations is working hard to streamline and improve the effectiveness of these devices, which could soon find a home in autonomous cars or even the Internet of Things (IoT).