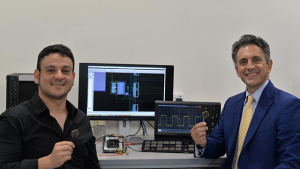 Researchers from the National University of Singapore (NUS) Green IC research group have created a new type of sensor for the Internet of Things (IoT). The battery-free wake-up timer works as an on-chip circuit and has already proven to dramatically reduce the power consumption of silicon chips. This technology is ideal for use in sensors utilized by the IoT.

The IoT is a rapidly expanding network of technologies that are all interconnected. As it grows and evolves to include smart homes and even smart infrastructures, the demand for silicon-chip sensors with extremely low power consumption and long lifetimes grows exponentially.

The sensors used in the IoT are typically made up of miniaturized systems. These systems contain sensors and circuits which process data, as well as power management and wireless communication systems. In order to reduce power consumption, most of the technology is kept in sleep mode until it is needed. A wake-up timer is used to trigger the sensors, which then perform the predetermined task. Wake-up timers are also are tasked with setting the minimum power consumption of these sensor nodes and help to reduce the overall power consumption.

The new design uses significantly less power than its predecessors. The wake-up timer is powered by a small on-chip solar cell. This chip has the diameter of a single strand of human hair and can be kept powered by a millimeter-scale battery for decades at a time. It also has a simply remarkable ability to operate without relying on voltage regulators. This is because it has a reduced sensitivity to supply voltage; this cuts down on the additional power that is normally wasted on other tasks. Additionally, the wake-up timer can continue operations without relying on a battery, so long as there is very slight ambient power. This was demonstrated under laboratory conditions by exposing an on-chip solar cell to light from the moon.

Scientists are certain this low-cost, high-power silicon system will be a significant addition to the IoT. They are hard at work developing other, similar systems that are energy-conscious and extremely effective. Their final goal is to create a fully functional battery-free system-on-chip.