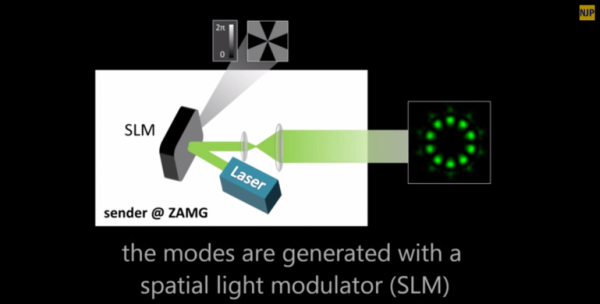 University of Vienna scientists used light beams configured in 16 different patterns that corresponded with binary numbers to test a new method of transmitting data.  The scientists used Orbital Angular Momentum of light (OAM) to twist the green laser into a corkscrew shape to increase the amount of potential communication channels. This was the first time OAM was used for long distance open-air data transmission.

A green laser was mounted on top of a radio tower at the Central Institute of Meteorology and Geodynamics and directed at a receiver at the University of Vienna. Sixteen different patterns were used to encode grey-scale images of Wolfgang-Amadeus Mozart, Ludwig Boltzmann, and Erwin Schrödinger across the Vienna. At the University of Vienna, a camera detected the beam and used an artificial neural network; the atmospheric interference was filtered out to reveal the transmitted images. This new method of transmitting data could be applicable in satellite and open air applications.