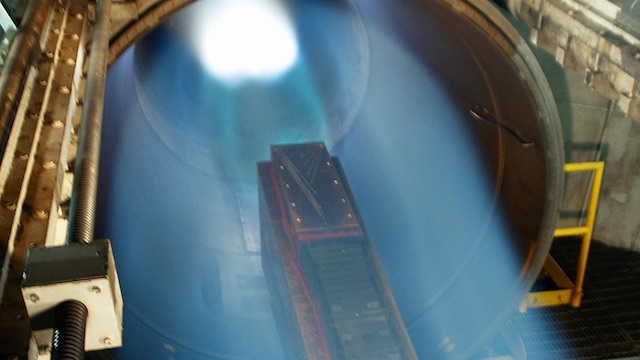 Researchers and engineers from the University of Texas at Arlington have successfully created an arc-heated hypersonic wind tunnel. This makes it the only structure of its kind to have been made at a university in the United States. Scientists intend to use the hypersonic wind tunnel in a number of applications, particularly the field of heat shields for hypersonic vehicles.

UTA aerospace engineering associate professor and director of the Aerodynamics Research Center Luca Maddalena has received two grants for their research. All told, Maddalena’s grants from the Office of Naval Research add up to $1.5 million over the next three years.

One of the grants, from the Defense University Research Instrumentation Program, went towards the purchase of a femtosecond laser system. This system involves using incredibly fast lasers to operate — a femtosecond only adds up to one quadrillionth of a second. This system will be the only one to operate in an arc-heated wind tunnel in the entire country.

Hypersonic vehicles can reach speeds of 3,500 miles an hour or more; this adds up to a lot of heat being generated from the friction. These vehicles can heat up to more than 15,000 degrees Fahrenheit. When temperatures reach these levels, the air around the vehicle experiences distinct chemical reactions. The superheated air, better known as plasma, evolves and changes even as it flows over the hypersonic vehicles. As such, scientists must take special pains when developing heat shields that actually work.

Scientists intend to use part of their grants to develop diagnostic methods for gaining a better understanding of plasma flow. This could lead to a better awareness of how flight environment impacts arc-jet tests, which in turn would lead to more streamlined and effective heat shields.

“It generally takes about 10 years to develop a new heat shield for a hypersonic vehicle and part of it is due to the uncertainties associated with the arc-jet plasma flow. In other words, you don’t know at what exact conditions you’re testing.”

The femtosecond laser system will give scientists the power they need to measure the composition and temperature of the plasma flow without interfering with the process. The incredibly advanced laser system will take about six months to be constructed. Scientists have never before used one in an arc-jet facility.