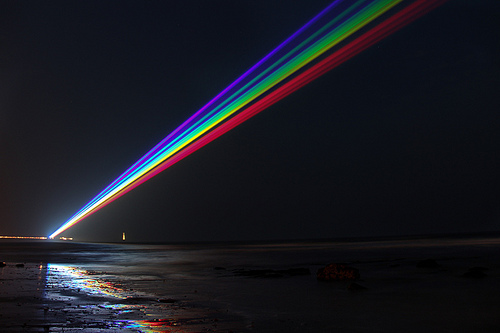 So far this year, engineers have said that lasers can provide internet access, create touchable holograms, control lightning, detect biological agents, and possibly even send us to space. Now, Japanese researchers claim that they just fired the world’s most powerful laser beam. The team from Osaka University’s Institute of Laser Engineering say their laser emitted the equivalent of 1,000 times the world’s energy consumption. The power of the 2 petawatt laser was concentrated into just 1 pico-second (a trillionth of a second).

The beam was fired using a 328-foot Laser for Fast Ignition Experiments (LFEX). Gizmag reports that “the laser system consists of a front end made up of a femtosecond oscillator, double pulse stretchers with diffraction grating pairs and three stages of optical parametric amplification (OPCPA), followed by a main amplifier, a pulse compressor, and focusing optics.” Basically, four devices that looked like fluorescent lamps repeatedly amplified the power of the beam and applied it to mirrors to make the highly-concentrated blast of energy. In an experiment on July 27, the Osaka researchers confirmed that their system created the most powerful laser beam in the world.

But before we get too excited about this Death Star laser, an important caveat: the experiment was conducted in a vacuum chamber. The LFEX is not a weapon; it is a scientific research tool. Looking ahead, the researchers will work on improving the system’s mirrors so that they can withstand a laser pulse as strong as 10 petawatts in the future.