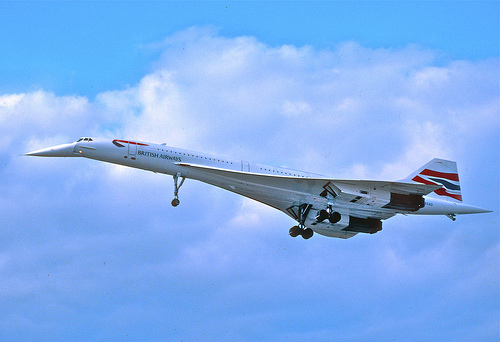 Airbus has just received a United States patent for a supersonic private jet that could make trips from London to New York in less than an hour. The jet, called the Concorde 2, would fly as fast as Mach 4.5, which is 4.5 times the speed of sound.

The patent, titled “Ultra-rapid air vehicle and related method for aerial locomotion,” describes a combination of turbojets, a rocket motor, and ramjets, which are usually used on missiles. The Concorde 2 would be powered by hydrogen stored onboard. The design includes hammocks for passengers and crew to sit in for comfort during takeoff.

In the past, Airbus received noise complaints about the Concorde, their previous version of a hypersonic luxury jet, which was in service from 1976 to 2003. That jet, which was about half as fast as the new version, was taken out of service in 2003 because of high operating costs and low revenue, especially after a crash in 2000 scared away passengers. The new version would lift off vertically like a space shuttle, so that the sonic boom—which is produced when the sound barrier is broken—would dissipate in the air without bothering people on the ground.

Unfortunately, Airbus has released a statement that crushes hopes of hypersonic hammock travel anytime soon. They wrote, “Airbus Group and its divisions apply for hundreds of patents every year in order to protect intellectual property, these patents are often based on R&D concepts and ideas in a very nascent stage of conceptualisation, and not every patent progresses to becoming a fully realised technology or product.”