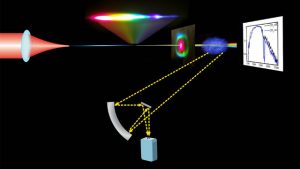 A new technique uses lasers to detect chemicals in the air. Researchers at MIT, Binghamton, New York, and in Hamburg, Germany, used mid-infrared lasers to turn molecules in the air into glowing filaments of ionized gas called plasma. This new method could be used for environmental monitoring, since the colors of the filaments can indicate the presence a wide range of molecules, including biohazards and pollutants.

Mid-infrared wavelengths have previously been considered for this purpose, but other attempts failed to generate the laser filaments in air. One other research team has succeeded in generating mid-infrared filaments in air, but only at a rate of 20 pulses per second, which is too low for practical detection tools. Now the MIT team used a more powerful system made of a femtosecond laser coupled with a parametric amplifier. This produced 100 gigawatts of peak power and allowed them to use 1,000 pulses per second, a dramatic improvement over previous attempts.

“People want to use this kind of technology to detect chemicals in the far distance, several kilometers away,” says principal investigator Kyung-Han Hong of MIT’s Research Laboratory of Electronics. The experiments have been limited to shorter distances inside the lab, but the team anticipates that their system would also work at much larger scales.