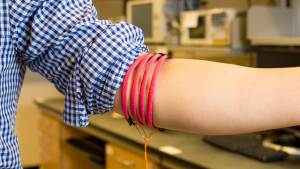 Wearable technology has already blurred the lines between humans and computers, and a new invention takes this even further by putting the human body to work for wearables. Electrical engineering researchers from the University of California-San Diego developed a system that uses the human body as a vehicle to send magnetic signals from one device to another. This new wireless communication technique, called “magnetic field human body communication,” could consume much less power than Bluetooth communication.

Bluetooth is a standard for using electromagnetic radiation to transmit data across short ranges so that gadgets like cell phones, smart watches, and speakers can communicate with each other. Wireless devices have drastically changed since the standard was developed back in 1994 by Ericsson, so the UC-San Diego researchers sought to improve the power constraints that limit today’s gadgets. They estimate that their new magnetic field technique is ten million times more effective than Bluetooth radios. (Ten million!)

According to the researchers, the reason they expect their method to work so well is because magnetic fields can pass freely through biological tissue, which means signals would lose minimal power while passing through the human body. Bluetooth, on the other hand, requires more power because our bodies naturally block electromagnetic radiation.

The researchers demonstrated their concept with a prototype made of copper wires insulated with PVC tubes. On one end, the copper wires are hooked up to an external analyzer and on the other end, the wires are wrapped in coils around the body. With these coils serving as sources for magnetic fields, magnetic signals can then travel through the body. The technique requires circular devices in order to work, which means it wouldn’t replace all Bluetooth technology, but it is ideal for smart watches and bracelets. So far, the engineers have shown that communication through magnetic fields is possible, but they haven’t measured power consumption yet. They presented their findings at the 37th Annual International Conference of the IEEE Engineering in Medicine and Biology Society in Italy this August.