Fiber optic cables have already transformed communications, and now similar light-based technology could revolutionize computing. Compared to traditional electrical wires, optical communication allows us to send larger amounts of data over long distances at faster speeds. It also doesn’t have the heat and interference problems that make wires inefficient. “As we are trying to fit more and more data on wires that we send from place to place, we are running up against the limit of what electricity can do,” said Janelle Shane, an engineer at UC San Diego who is trying to shrink lasers down to a size small enough to fit on a tiny computer chip.

We want to try and use those same advantages that we got from fiber optics on a computer chip, for sending data not only between computers but now within computers as well.

Although light-based computing sounds perfectly logical, working with light on such a small scale is extremely challenging. Shane and her colleagues are trying to shrink lasers down to a size that is 100 times smaller than the width of a human hair. At this size, even the tiniest mistake has huge consequences. Furthermore, as the semiconductor in a laser gets smaller, it also becomes weaker. “There is only so much it can amplify light,” says Shane. “So we are fighting against that problem where we are trying to use a very small amount of semiconductor to do a lot of amplifying.”

So, to optimize the tiny beams of light, the researchers are borrowing a technique from European architecture. In round buildings like London’s St. Paul’s Cathedral, a whisper on one side of the dome bounces around the dome so it can be heard by anyone else around the edge of the room. 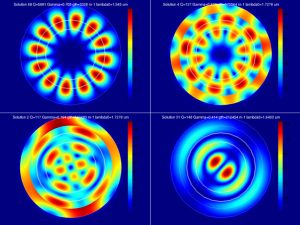 Using this technique, Shane and her colleagues are working to optimize lasers to make data transfer as fast and efficient as physics will allow.