EMI vs. EMC: What’s in an Acronym?

“A rose by any other name would stink.” – Kenneth Adamson

We have all seen advertising copy for test equipment manufacturers’ “EMC receivers” and “EMC test services” provided by commercial EMI test facilities. While we know what the aforementioned receiver does, and what sort of services the test facility supplies, the nomenclature is wrong and is symptomatic of a deeper problem.

EMI: “Any electromagnetic disturbance … that … degrades … performance of electronic or electrical equipment.”

EMC: “The capability of electrical and electronic systems, equipments, and devices to operate in their intended electromagnetic environment … without … unacceptable degradation as a result of electromagnetic interference.”

Requirements controlling EMI characteristics such as CISPR 22, CISPR 25, RTCA/DO-160 and MIL-STD-461 are means to an end. That end is electromagnetic compatibility between devices qualified to these standards and between them and radios. Conjointly, EMI requirements are not an end in themselves. Any device with an FCC Part 15 sticker has a disclaimer to the effect that, “This device may not cause harmful interference…” This is the desired end result – EMC. If the device does cause interference (despite having met its EMI requirements), the user is advised to separate culprit and victim, and as a last resort, shut the culprit off: the licensed user of the spectrum has priority over the unlicensed polluter.

The bottom line is that standards controlling EMI are one of the tools by which we achieve EMC and EMC is demonstrated, if at all, on the integrated system, which is typically a vehicle that drives, sails (above or below the sea) or flies (within or above the atmosphere). Equipment designed for use in homes, offices, and factories don’t have a specific installation, and there is no EMC check for such equipment. EMI requirements to which they are subjected are the sole qualification relative to EMC. Hence, it is not surprising that this market segment most often fails to properly distinguish between EMI and EMC.

Integrated vehicles are functionally evaluated – EMC tested – ensuring that each subsystem operates properly as part of the greater whole, acting as neither a source of nor a victim to EMI within the vehicle. Separately, the entire vehicle is subjected to external stresses such as steady-state and transient electromagnetic fields, and the subsystems must operate properly. “Proper operation” might include graceful degradation, such as anti-lock brakes becoming purely hydraulic brakes with no electronic control.

Most importantly for this discussion, vehicle antennas will be interrogated by an EMI receiver looking for signals coupled to that antenna in-band to the receiver. On an automobile, that would mean 530 – 1710 kHz and 87.5 – 108 MHz at the point where the coaxial transmission line disconnects from the AM/FM receiver, and perhaps the “shark fin” antenna used for satellite reception. On a military aircraft, in contrast, there could be such measurements from 0.15-1.99 MHz (ADF), 2-30 MHz (hf ), 30-88 MHz (vhf-FM), 108-152 MHz (vhf-AM, with both air navigation aids and communications residing in this band), 225-400 MHz (uhf-AM), 960-1215 MHz (TACAN), and perhaps others as well.

Such testing is the ultimate high fidelity EMC check, because the test set-up is the installation. All EMI standard test set-ups are approximations of expected installations, whether vehicle, home, office, or plant, and at best provide an upper bound of what would be expected to be measured in situ.

Along these lines, I like to quote a forerunner standard to MIL-STD-464, which is the present day military standard for electromagnetic effects that apply to a vehicle procurement. The 1967 vintage MIL-E-6051D, “EMC Requirements, Systems,” paragraph 3.2.4.1, “Subsystems and Equipment,” opens as follows: “Unless otherwise specified in the contract, subsystems/equipments shall be designed to meet the requirements of MIL-STD-461 and MIL-STD-462. Since some of the limits in these standards are very severe, the impact of these limits on system effectiveness, cost, and weight shall be considered…”

The importance of this paragraph cannot be overstated. The essence of system engineering – any engineering – is tradeoffs. In vehicle engineering, we can review EMI test data, and decide if out-of-tolerance signatures allow an acceptable level of EMC. Often we do that by test – for instance, by installing equipment with excessive radiated emissions (RE) in the vehicle and monitoring the antenna band wherein the offending signals reside to see if they do in fact couple into the receiver, or if the installation provides enough isolation via shielding, shading and distance between equipment and victim antenna to eliminate the potential for interference.

Vehicle EMC engineers can do all this because EMI qualification testing occurs after a contract has been signed between equipment vendor and integrator. Integrator and vendor can collaboratively find an optimal solution for “system effectiveness, cost, and weight” and schedule. The process can be bumpy, but it does work, especially within the military-industrial complex.

In the consumer marketplace, where FCC or European Norm or other national laws require passing EMI requirements before placing products on the market, there is no flexibility: the limit is the law. Therefore an extreme amount of attention is placed on measurement repeatability/uncertainty. A level playing field – irrespective of where a device is tested, or by whom – is an economic sine qua non (without which, nothing). Tight uncertainty requirements supporting repeatability requirements such as the +/- 4 dB normalized site attenuation for RE testing and the -0, +6 dB tolerance for the electric field immunity test uniform field area require more expensive test sites and more complex procedures than those required for equipments slated for vehicle usage. Two factors differentiating facility costs are the degree to which reflections are controlled, and separations between antenna and test sample, which drive chamber size.

It is commonplace to contrast military vs. commercial EMI test practices, but that is not a fundamental distinction. Commercial aerospace and automotive EMI test practices have much more in common with military practice than they do with qualification of consumer items on open area test sites (OATS) or in fully or semi-anechoic chambers (FAC/SAC). The fundamental difference is installation in a vehicle (usually metal) vs. equipment slated for use in homes, offices and industrial plants. EMI testing of equipment installed in vehicles requires acknowledgment of the immediate proximity of electrical ground (vehicle structure) and the possibility that vehicle antennas will be placed nearby culprit electrical noise generators. Neither of these are the case for non-vehicle equipment. Or more precisely, it is quite possible in the home, office or factory that someone may try to listen to or watch a broadcast program or receive a wireless phone call and find that some device in the receiver’s vicinity is causing interference. But it is under their control to increase culprit and victim separation, when the problem usually goes away. Separations up to three meters are deemed under the control of the Class B equipment end user, and separations up to ten meters are assumed under the control of the Class A end user.

An example of the full vehicle EMC process offers insight into the fundamental differences between vehicle and non-vehicle EMI qualification. Medical devices designed for hospital use are needed in air ambulances. Part of ambulance qualification is EMI/EMC. The equipment in question already meets all medical device certifications, as it is commercially available and used in hospitals. But when re-qualified to aircraft EMI requirements, involving antenna-test sample separations of not three meters or more, but instead one meter, these devices often fail. Because the intent is to use existing off-the-shelf equipment, design modifications are undesirable and to be avoided, if at all possible.

When RE failures against the equipment limit are found, it is standard operating procedure to place the device in the aircraft and monitor aircraft antennas covering the failing frequencies with a spectrum analyzer, looking for evidence of excessive coupling. This is nothing new; the technique has been included in MIL-STD-464 since its inception in 1997. It is only the application to equipment neither designed for vehicle use, nor permanently installed in a fixed location within a vehicle that is different.

If the rfi signal measured at the aircraft antenna is deemed low enough to not be a problem, then the equipment-level EMI test failure does not force redesign. If the level measured at the vehicle antenna is too high, redesign is indicated despite the previous far field qualification for hospital use. One-meter re-qualification is necessary despite the previous qualification involving far field testing (three or ten meter), despite persistent voices calling for a single unified far-field test approach for EMI testing, which comes from the OATS/FAC/SAC faction.

Were we to accept the oft-repeated superiority of OATS/SAC/FAC measurements and replace vehicle type one-meter measurements we would at our peril violate basic physical laws. While far field measurements are attractive for deriving analytical relationships between various circuit parameters and the resultant electromagnetic field, these predictions are not useful to vehicle integrators working in the near field.

Electric field structure is qualitatively, not just quantitatively different at one meter than at three and beyond. In close, we measure not only radiating signals, which are also picked up farther out, but in addition, inductive or quasi-static fields which do not propagate into the far field. On vehicles where the separation between culprit emitter and victim antenna is much closer than three meters, three meter and farther out measurements do not protect against interference.

The traditional automotive whip antenna used in the AM & FM broadcast bands is a good example. In the far field of a wire radiator, the electric field will be parallel to the wire, assuming the wire is long enough to develop a potential drop across its length. For other than a large ship or very large aircraft, this can’t happen in the AM band, only at FM. But in close, whether AM or FM, there is a non-radiating electric field component that starts on the wire and ends on the ground plane beneath it, due to the potential on the wire relative to ground. It cannot propagate, because the magnetic field associated with that wire circulates around it, and is co-directional with it. Electromagnetic energy only propagates when electric and magnetic field vectors are at mutually non-zero angles (Poynting’s theorem).

If that whip antenna can be one meter from a noisy cable, then the EMI test has to also place the antenna at one-meter separation.

But the tabletop ground plane five centimeters below test sample attached cabling is worth up to 20 dB in reduced cable radiation efficiency for emission work, and something similar in terms of the effective aperture of test sample-connected cables during immunity/susceptibility testing. Especially for automotive use, where unshielded cables are the norm, meeting very stringent radiated limits one meter away in the absence of that ground plane is at best impractical.

It is presuming to insist on OATS and SAC/FAC type measurements in lieu of one-meter measurements for vehicle equipments. The comparison is apples and oranges. Considering not only (vehicle) equipment EMI testing, but also on-vehicle EMC assessment, including the super-hi fidelity check of RE coupling to vehicle antennas, it is clear that the overall vehicle EMI/EMC program efficiently does exactly what is needed.

Finally, there is the issue of protection of off-vehicle receivers. Automobile-level RE limits are imposed at ten meters to protect radios operating near roadways. Army ground vehicle-level RE limits impose control at one meter, to protect radios in a tactical operations center adjacent to which the vehicle might be parked. Some military aircraft impose RE control at one nautical mile to protect against aircraft detection by hostiles.

The simple conclusion is we test things the way we use them. It is always better to separate noisemakers and sensitive receivers, and when we can separate them we do, but when we can’t, then we have to assess the potential for EMI at the separations we expect in actual use.

To demand that vehicle equipment-level EMI testing adopt SAC/FAC/OATS type methods is akin to the old joke about looking for lost car keys not where they were dropped in a dark alley, but a block away under a street lamp, because it is easier to see there. 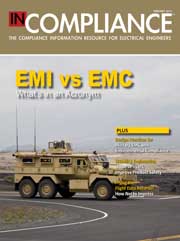