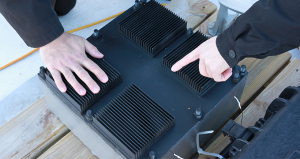 Researchers from MIT’s Department of Chemical Engineering have devised a new system that takes temperature changes and converts them into usable electricity. Although thermoelectric devices have become increasingly common over the years, this one differs in a dramatic and fundamental way: while most models require to different temperature inputs at the same time, the system devised at MIT only needs the ambient temperature changes that occur naturally to generate power.

“We basically invented this concept out of whole cloth. We’ve built the first thermal resonator. It’s something that can sit on a desk and generate energy out of what seems like nothing. We are surrounded by temperature fluctuations of all different frequencies all of the time. These are an untapped source of energy.”

Although the new system is generating relatively low power levels so far, the team believes this is just the first step for thermal resonators. The new concept has numerous advantages in its favor: it does not require direct sunlight, and is perfectly capable of generating energy from ambient temperature changes even when it’s placed in the shade. This is a huge benefit, as the system would not be impacted by short-term weather changes such as cloud cover, environmental conditions, or wind changes. The device can be placed anywhere without suffering an impact on performance. Researchers have suggested that putting it under a solar panel would allow the device to draw away waste heat — and best of all, the shadow cast by the panel would in no way impact the thermal resonator’s performance.

The thermal resonator already surpasses similar items available commercially. Pyroelectric material, which is used to convert temperature fluctuations into energy, is outstripped more than three times in terms of power per area by thermal resonators. To achieve this, researchers had to create their own combination of materials. The materials are compiled for maximum thermal conductivity. Basically, it is a metal foam made of copper or nickel and coated with graphene. The whole structure is infused with octadecane, a phase-changing wax substance capable of switching between solid and liquid forms.

This strange assortment of materials can effectively store heat and convert it into usable energy. With further testing, harvesting a variety of different types of heat may be possible. Additional research is ongoing, but researchers are convinced that the thermal resonator will unlock a world of long-lasting energy sources.