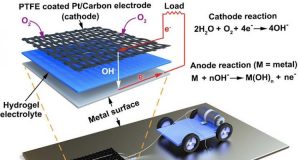 University of Pennsylvania’s School of Engineering and Applied Science

Engineers from the University of Pennsylvania’s School of Engineering and Applied Science are working to create a robot that can draw energy from metal. The new technology combines two methods that electronics currently use to access power, and uses them to create a whole new way for electronic devices to function.

Typically, electronics that require a power source rely on two standard choices. These are known as energy harvesters and batteries. With batteries, the energy is stored internally; however, this makes them heavier and creates a finite supply of energy for the device to pull from. The other option is harvesters, such as solar panels. These draw energy from the environment, transforming it into something that can be used by electronics. This technique too comes with drawbacks; the harvesters can only function under specific conditions, and can often take quite some time to turn the energy into a useable form.

Engineers think they have combined the best of both worlds by creating something called a ‘metal-air scavenger.’ The system provides power to devices by breaking and reforming a series of chemical bonds over and over, much as a battery does. But at the same time, the power that is being transformed is being drawn in from the environment, just as a harvester would. The system can utilize energy from the chemical bonds in metal and air that surrounds it.

Tests showed that the new power sources possess 10 times the power density of even the best energy-harvesters. Even more impressive, the device provides more than 13 times the energy density found in lithium-ion batteries.

Researchers think this innovation could help create a new paradigm in robotics. In theory, this technology could one day lead to machines capable of self-powering by seeking out and breaking down the chemical bonds for energy found in metal. Essentially, these robots would be able to eat metal the way humans do food, turning it into a steady supply of energy.

But such innovations are further down the line. Right now, engineers are working to improve and streamline their new technology, while simultaneously exploring different applications in which it could prove useful.