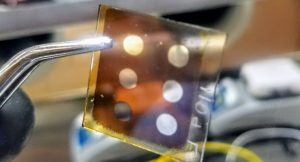 Iowa State University engineers have designed a new type of solar cell that is durable, lightweight, and cost-efficient. Researchers have discovered a way to integrate perovskites as the active ingredient in these solar cells, resulting in a device that is flexible, efficient, lightweight, and low-cost.

Perovskite materials are the game-changer in this equation. This hybrid organic-inorganic ingredient works well with silicon cells, as they have a complementary bandgap, can reach efficiency rates of nearly 25%, and can be integrated with silicon with relative ease. Unfortunately, there was one major roadblock to creating these high-powered solar cells: heat.

During testing, it was discovered that hybrid perovskite solar cells break down under high temperatures. Obviously this posed a problem for the solar cells, which require bright, powerful sunlight to operate effectively. Luckily, engineers on the project developed some unconventional solutions to this vexing problem.

There were a number of factors that led to the success of these new solar cells, and one, in particular, involved altering the makeup of the perovskite material so it could maintain stability even at high temperatures. This involved removing the organic compounds in the material. Next, they substituted inorganic materials like cesium for the organic ones, causing the material to be stable even at high temperatures.

Additionally, experts created a fabrication technique to make the process more reliable and easier to replicate. The technique builds the perovskite one minuscule layer at a time using vapor deposition. This technique has the distinct advantage of being consistent and effective. Furthermore, this technique is already commonly used in a variety of different industries, meaning that scaling up for commercial production should be a relatively simple process. And the final results, as the scientists are quick to point out, speak for themselves.

“Our perovskite solar cells show no thermal degradation even at 200 degrees Celsius (390 degrees Fahrenheit) for over three days, temperatures far more than what the solar cell would have to endure in real-world environments. That’s far better than the organic-inorganic perovskite cells, which would have decomposed totally at this temperature. So this is a major advance in the field.”

Harshavardhan Gaonkar, the paper’s first author, who has a doctorate in electrical and computer engineering from Iowa State