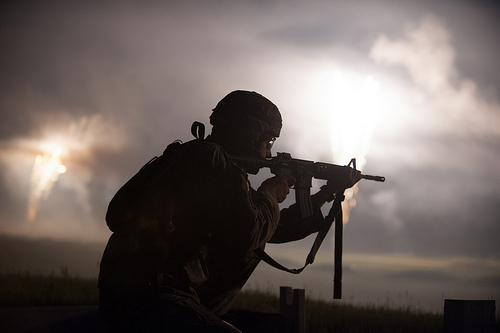 From invisible shields to firefighting robots and more, the latest military innovations are straight out of science fiction. Now the U.S. Army is developing a handheld electric ray gun to destroy the electrical circuitry of enemy electrical weapons such as roadside bombs, Bluetooth-enabled IEDs, and drones. The ray gun is called the “Burke Pulser,” after its designer, Army Armament Research electronics engineer James E. Burke.

The device consists of a piezoelectric generator and two protruding antenna and it fits onto the end of a standard-issue M4 rifle. Burke estimates that each device could be built for under $1,000. It operates using piezoelectricity, the electrical charge that is generated when mechanical stress is applied to certain solid materials. In this case, the system takes the energy that is released when the gun fires and converts it into pulses of electrical energy. The Burke Pulser is so powerful that it has a built-in blast shield to protect soldiers from the device’s hazardous electricity levels.

The system is still in early development phase, with testing now being done to confirm the range and whether it can disable electronic devices. The details remain classified, but at a National Defense Industry Association event in Baltimore earlier this week, Burke said the results are “very promising.” He told national security news website Defense One that soldiers “already carry rifles. Why not use something that every soldier already carries.”