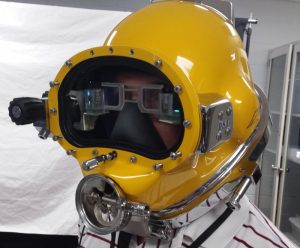 When the Navy’s divers go underwater for various tasks, they have to rely on pre-dive briefings to provide information about their surroundings.  Soon, they could get detailed information directly through their diving helmets. A team of engineers at the Naval Surface Warfare Center Panama City Division is developing a Divers Augmented Vision Display, which is a high-resolution, transparent head-up display embedded directly into helmets.

The new system will give divers real-time operational data that will help improve their situational awareness and navigation. Divers who are targeting an underwater object such as a ship or downed aircraft will have the assistance of diagrams, photographs, text messages, sector sonar (an overhead view of their dive site), and even augmented reality videos. Underwater Systems Development Project Engineer Dennis Gallagher is leading the project. He says:

By building this HUD directly inside the dive helmet instead of attaching a display on the outside, it can provide a capability similar to something from an ‘Ironman’ movie. You have everything you visually need right there within the helmet. 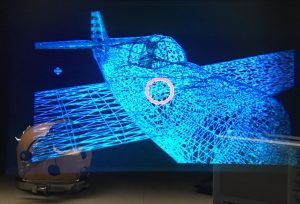 The augmented reality helmet can be used by the Navy for diving missions such as ship husbandry, underwater construction, and salvage operations. However, it could also be helpful for first responders and the commercial diving community. The prototypes will be tested during in-water simulation in October 2016