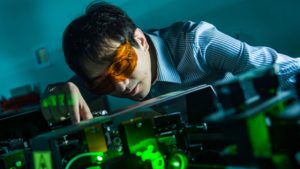 An innovative nanoparticle amplifier could unlock new kinds of chemical sensing and molecular imaging that aren’t possible with today’s technology. Researchers at Rice University developed the optical parametric amplifier (OPA), which can generate infrared light and boost the output of one light by capturing and converting energy from a second light. The device’s mechanism is similar to a laser, but while lasers only operate at a single output frequency, the optical amplifier can be tuned over a range of frequencies that includes a portion of the infrared spectrum.

Tunable infrared OPA light sources today cost around a $100,000 and take up a good bit of space on a tabletop or lab bench. What we’ve demonstrated, in principle, is a single nanoparticle that serves the same function and is about 400 nanometers in diameter. 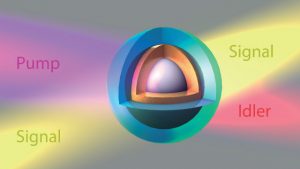 The OPA is extremely small—about 15 times smaller than a red blood cell. Other research groups have demonstrated nanoscale infrared lasers, but the Rice team has created the first tunable version. “Optical parametric amplifiers operate with light rather than electricity,” said Naomi Halas, the lead scientist on Rice’s study. “In OPAs, a strong pump light dramatically amplifies a weak ‘seed’ signal and generates an idler light at the same time. In our case, the pump and signal frequencies are visible, and the idler is infrared.”

The study is described in a paper called “Toward Surface Plasmon-Enhanced Optical Parametric Amplification (SPOPA) with Engineered Nanoparticles: A Nanoscale Tunable Infrared Source,” which published in the journal Nano Letters on April 18, 2016.