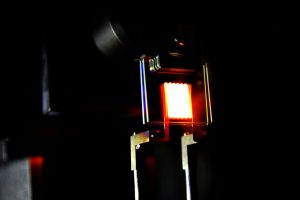 A proof-of-concept device built by MIT researchers demonstrates the principle of a two-stage process to make incandescent bulbs more efficient. This device already achieves efficiency comparable to some compact fluorescent and LED bulbs. |
Courtesy of the researchers

Incandescent bulbs are quickly going out of style, with tighter efficiency standards in the United States and other countries aimed at phasing them out altogether. Their warm glow is pleasant, but they are energy hogs, so it is logical to replace them with efficient alternatives, compact fluorescent bulbs (CFLs) and light-emitting diode bulbs (LEDs). These new bulbs give off less heat, use less energy, and last longer than incandescent bulbs, but the light they emit is known for being harsher than the old bulbs most people are used to. Now, it looks like incandescent bulbs might have a fighting chance to stick around, thanks to an innovative new design from researchers at MIT and Purdue University.

The researchers say their new bulb is three times more efficient than today’s incandescents, and it even matches the efficiency of some of today’s CFLs and LEDs. With some improvements to the design, their incandescent bulb could actually be more efficient than the bluer alternatives. Traditional incandescent bulbs waste more than 95 percent of their energy by producing heat in the form of infrared radiation instead of visible light, so the researchers found a way to recycle that heat and put it to good use.

In the new design, the bulb’s filament is surrounded by photonic crystals that capture the infrared waves and reflect them back to the filament to be re-absorbed and re-emitted (in other words, recycled) as visible light.

While this is good news for incandescent bulbs, the research has much broader implications. It proves that applying new photonic designs to traditional devices can improve energy-coversion schemes such as thermo-photovoltaics. “The ability to control thermal emissions is very important. That’s the real contribution of this work,” said MIT researcher Marin Soljačic, who is one of the authors of a paper in Nature Nanotechnology about the breakthrough.