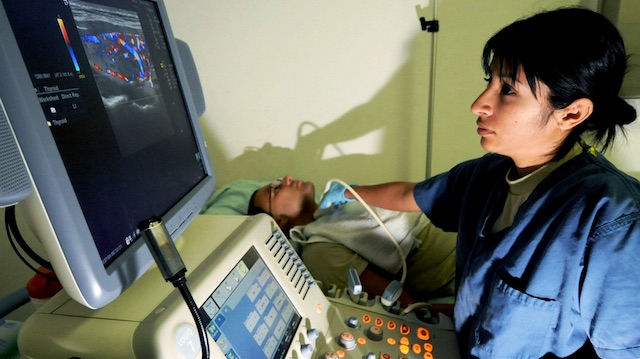 Scientists at the University of Queensland in Australia have developed a new method for measuring ultrasounds that is extremely sensitive and accurate. Researchers believe this technology could have a wide variety of different applications in multiple fields.

Scientists combined nanofabrication and nanophotonics methods in order to produce the sensors, which are ultra-precise. Nanofabrication consists of creating incredibly tiny devices and technology that can be used in a variety of different fields. Nanophotonics, also known as nano-optics, is the study of light and its behavior on the nano-scale. Using these methods, the ultrasound sensors were placed on a silicon chip.

Unlike earlier versions of the ultrasound, this one is exquisitely sensitive. In fact, for the first time scientists are able to hear the sounds of random forces from air molecules. Scientists believe they have hit the limits of what the technology is actually capable of, and have maximized its full potential.

Researchers are convinced that the accuracy of this technology is so comprehensive, they will soon be able to better understand biology as a whole. This technology will allow them to listen to and one day understand the sounds made by viruses, cells, and an assortment of living bacteria. By better understanding these biological systems, scientists could develop better treatments for a variety of illnesses and medical concerns.

“This is a major step forward, since accurate ultrasound measurement is critical for a range of applications. Ultrasound is used for medical ultrasound, often to examine pregnant women, as well as for high resolution biomedical imaging to detect tumors and other anomalies. It’s also commonly used for spatial applications, like in the sonar imaging of underwater objects or in the navigation of unmanned aerial vehicles. Improving these applications requires smaller, higher precision sensors and, with this new technique, that’s exactly what we’ve been able to develop.”