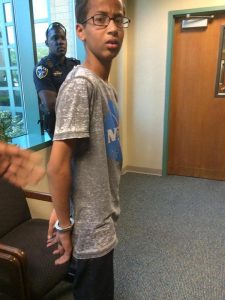 Police announced today that no charges will be filed against Ahmed Mohamed, a ninth grader who was arrested in Irving, Texas, on Monday because his teachers thought his homemade digital clock might be a bomb. The teen—who tinkers with electronics as a hobby—brought his latest invention to school on Monday to show it to his engineering teacher. He built a digital clock using a circuit board, a power supply wired to a digital display, and simple cable. The whole device was contained in a pencil case. The clock’s alarm beeped during Mohamed’s English class, so he showed it to his teacher and explained that it was a homemade clock.

Later that day, he was removed from school, handcuffed, and arrested for suspicion of a bomb hoax. He was placed in a juvenile detention center, where he was fingerprinted, searched, and had a mug shot taken. “It made me feel like I wasn’t human, it made me feel like a criminal,” Mohamed said, in a video that the Dallas Morning News posted to YouTube. His family has raised questions over whether school officials and the police overreacted because of ethnic and religious bias. In a press conference on Wednesday, police Chief Larry Boyd emphasized that his department has an “outstanding relationship” with the local Muslim community, and he plans to meet with Mohamed’s family to discuss their concerns.

Cool clock, Ahmed. Want to bring it to the White House? We should inspire more kids like you to like science. It’s what makes America great.

A photo of Mohamed in handcuffs and—like any aspiring engineer, a NASA shirt—quickly went viral. His sisters created a twitter account for him, and within just a few hours he had more than 32,000 followers and messages from thousands of supporters, including Hillary Clinton and Mark Zuckerberg. President Obama even invited him to show off his invention at the White House. For now, Ahmed Mohamed is at home, free to experiment in his bedroom, which is filled with circuit boards, cables, electrical converters and a soldering iron.