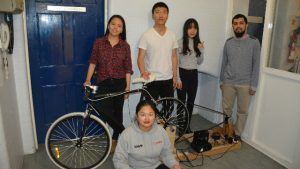 Today’s electrical engineering students are getting the chance to put their lessons into practice with more hands-on projects. We recently reported that engineering students raced in a solar electric boating competition in Ohio. Now, students at the University of Leicester in England have built a bicycle-powered generator to demonstrate an alternative source of energy.

The students connected a bike to a 250 watt motor via a belt. When a rider pedals at a comfortable pace of 60 revolutions per minute, it provides enough current to charge a battery. The battery then supplies energy to a square wave inverter circuit, which converts the DC voltage produced from the bike to AC voltage which then powers a 55 watt projector for enough time to watch a movie.

The original brief for the bicycle was to power a cinema projector but it could also be used as a phone charging utility station in places like the University Students’ Union where students can come to plug their charger in and pedal the bicycle so that they have a physical idea of the energy they use whilst charging their phones.