Two undergraduate students at the University of Washington have invented gloves that can translate sign language into speech or text. Each glove has sensors that record hand position and movement and transmit data wirelessly to a computer. The computer looks at the gesture data through various sequential statistical regressions, similar to a neural network. If the data match a gesture, then the associated word or phrase is spoken through a speaker. Thomas Pryor, who is studying aeronautics and astronautics engineering explained: 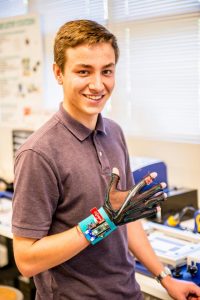 Many of the sign language translation devices already out there are not practical for everyday use. Some use video input, while others have sensors that cover the user’s entire arm or body. Our gloves are lightweight, compact and worn on the hands, but ergonomic enough to use as an everyday accessory, similar to hearing aids or contact lenses.

The gloves are primarily designed to be used as a way to translate American Sign Language, but similar technology could also be the foundation for other applications, such as gesture controlled gaming and virtual reality or for monitoring stroke patients. Pryor and his collaborator, another sophomore named Navid Azodi, won a 10,000 Lemelson-MIT Student Prize for their invention, which they call “SignAloud.”