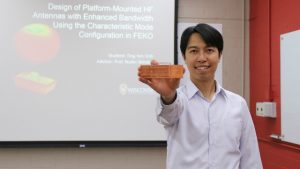 Ting-Yen Shih, a PhD student from the University of Wisconsin-Madison, was today announced the 2015 winner of the FEKO Student Competition.  The contest, now in its 11th year, supports engineering education and academic excellence and is aimed at students interested in antennas, microwave devices, bio-electromagnetics, electromagnetic compatibility, and other electromagnetic related fields.  The competition is an ideal opportunity for the students to showcase their work with FEKO, the electromagnetic solver of Altair HyperWorks. Entries for the competition this year were received from many countries, including Argentina, Belgium, South Africa, the USA and Australia.

“Many antennas working at the high frequency (HF) band tend to have significantly smaller dimensions than the wavelength at which they operate, and, therefore, suffer from narrow bandwidths. Since HF antennas are often mounted on metallic platforms that are physically larger than the antennas themselves, if the platform can be used as part of the antenna, the maximum linear dimension of the antenna can be increased, resulting in an enhanced bandwidth. Our goal was to design platform-mounted HF antennas with enhanced bandwidth using the characteristic mode configuration in FEKO,” explained Shih.

Professor Nader Behdad, Shih’s supervisor in this project will receive the prize for “Winning Supervisor.”

The winning project along with the honourable mentions are available for download. Ting-Yen Shih will also be presenting an overview of his project via a webinar early in the New Year.  For more information please visit the Altair University website.

Details on the 2016 FEKO Student Competition will be announced in March 2016.