We also learned that “inductors” have a property that causes their impedance to increase as frequency increases (Equation 1) and that, when combined with capacitors, they produce resonant circuits. While inductors certainly have inductance (when used in a circuit), we do not need a physical inductor to have inductance!

Why Is This Important?

We are constantly exposed to products and components which claim to have low inductance. This is one of the main causes of the misunderstandings surrounding inductance.

The fundamental fact is that the only time we have inductance is when there is a loop of current. Without the current loop, we cannot have inductance. Of course, as soon as there is current, the current must return to its source, so there will always be a current loop whenever there is current. This is a fundamental fact of physics. The goal of this article is to try to dispel some of the misconceptions surrounding inductance and to encourage engineers to think more clearly about these physics.

The definition of inductance comes from Faraday’s Law (Equation 2). If we dissect this equation and relate it to Figure 1, we see that both sides of the equation require a loop. The left-hand side is the integral (or simply the summation) around a closed loop of the electric field multiplied by the length (which is simply the voltage). The voltage around the loop is the same as the voltage across a small gap, as shown in Figure 1. The point is that a loop is required creating the loop inductance. 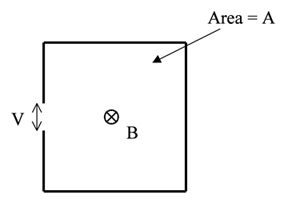 When we look carefully at the right-hand side of Faraday’s Law, we see that there is a double integral (area of a surface) where the amount of time-varying magnetic flux density within the surface area is summed. Since there is a surface, there must be a defined perimeter, again forming a loop.

The standard unit of inductance is the henry. It is a derived unit that relates the amount of negative voltage created by a time-varying current. If the rate of change of the current is 1 ampere/second, then one henry will induce a voltage across the gap (with a magnitude of negative one volt) to resist the change in current.

If the time-varying magnetic field within the surface area is not changing with position (an electrically small loop, for example), then Faraday’s Law reduces to Equation 3.

If we now induce a time-varying current in this loop, there will be a time-varying magnetic flux within the loop. Equation 3 shows us that there will be a negative voltage induced in the loop, effectively impeding the initial flow of current. Clearly, as the size of the loop area becomes larger, the amount of negative voltage (inductive impedance) will increase. The loop area is the primary physical effect that controls the amount of inductance a current will experience.

The size of the loop is determined by a, the radius of the loop. This radius is both outside the natural log function and inside the function. The radius of the wire, r0, is only within the log function, and so the inductance varies much more slowly with the radius of the wire. Figure 2 shows the relative change in total loop inductance as either the loop radius or the wire radius changes. It is clear that the loop area has a much more significant impact on loop inductance. (The relative impact of the wire size was so small compared to the loop area that a log scale was required to see the effect of wire radius change!)

The bottom line is that a loop must be defined before the term ‘inductance’ has any meaning. A simple, straight wire, a braided ground strap, and a surface-mounted capacitor do NOT have inductance by themselves! We could discuss the partial inductance of those items, but until the loop is defined, the inductance is not defined. (Partial inductance will be briefly explained in a later section.)

When a vendor discusses the inductance of a braided ground strap, how the inductance is determined should be understood so that the user can determine if the braided strap will or will not perform in a similar fashion in his or her application. Similarly, a surface-mounted capacitor often has a specification for an equivalent series inductance (ESL). How is this possible without defining the loop where the current will flow? Again, we need to understand the measurement process. The vendor simply places the capacitor over a very thin insulator with a ground plane beneath it. A voltage is applied between the capacitor’s port #1 and ground-reference, the current flows through the capacitor and returns directly below in the ground plane, forming as small a loop as possible. Of course, when the capacitor is used in a real-world printed circuit board and connects to internal PCB layers, the amount of actual inductance is much greater than in the ideal ESL.

As mentioned in the above section, the actual inductance of a decoupling capacitor mounted on a PCB is much higher than the vendor’s reported ESL. The connection inductance depends on the distance between the vias and the distance from the top (or bottom) mounting location to the planes that are to be decoupled. (Connection inductance is considered to be ‘above the planes’ only and does not consider the separation between the power and ground planes, nor the distance from the capacitor to the observation point.) Figure 3 shows a side view of a typical decoupling capacitor mounting on a PCB.

It is obvious that if the vias are placed close together and the planes to be decoupled are near the top of the PCB (when the capacitor is mounted on the top of the PCB), the connection inductance, represented by the loop, will be minimized. However, there are limits to how close the vias can be placed due to manufacturing issues. There are also limits to how close to the top surface the power/ground-reference planes can be located. So it is important to understand how the mounting will affect the performance of the capacitor and the connection inductance [2].

Figures 4 and 5 show common mounting configurations for capacitors of size 0603 and 0402, respectively, for typical manufacturing limits. Table 1 shows some calculated connection inductances (without ESL) for 0805, 0603, and 0402 size SMT capacitors for different depths to the power/ground-reference plane pairs [3-4]. (See references for details on the formula used for this calculation.) 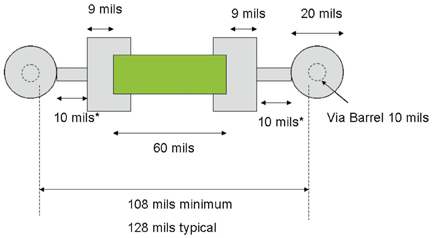 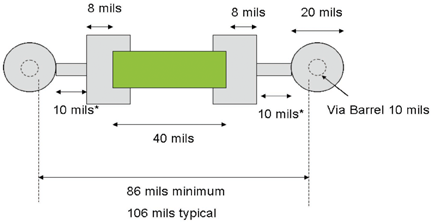 These values are calculated with the example of 7-8 mils from capacitor-to-mounting-pad-edge, 20 mils from capacitor-mounting-pad-edge-to-via-pad, via pad diameter of 20 mils, via barrel size of 10 mils, and trace width equal to 20 mils. The absolute minimum distance from via pad to capacitor mounting pad edge is reported to be 10 mils, but typically 20 mils is used to be safe.

The distance between the via pad and the capacitor mounting pad was kept to a small value in the above calculations. If this distance is increased slightly to 50 mils, the connection inductance increases to the values in Table 2.

Table 2: Connection inductance for typical capacitor configurations with 50 mils from capacitor pad to via pad

The connection inductance plays a much greater role in the performance of decoupling capacitors than the typical ESL of these components. Connection inductance values of 1 to 3 nanohenries are typical with the most common surface-mount capacitor sizes and manufacturing technologies. Using the tables, engineers can decide if a decoupling capacitor is better placed on the top or bottom surface of the PCB in order to provide charge to the power/ground-reference plane pairs.

Figure 6: Mutual inductance from current in one loop creating flux in second loop 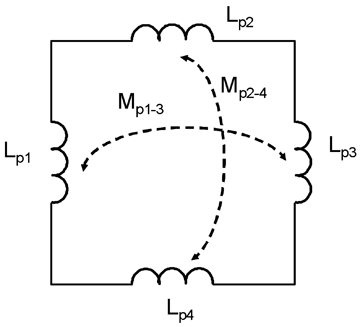 The concept of partial inductance is especially useful when the physical geometry is complex and it is difficult to assign the loop inductance to any one location around the loop. For example, Figure 8 shows current flow from the power plane in a PCB through the output driver of an IC, through a trace to the IC load, and finally through the ground-reference plane back to the power supply source. Since there is a closed loop of current, there is an inductance associated with that current path … but where could we place the loop inductance in this circuit? First of all, since the various conductors have different sizes, it would be impossible to find a formula to find the loop inductance. However, since we know this inductance exists (even if we cannot calculate it easily), where would we place the inductance? If we choose location ‘A’, then we ignore any voltage drop in the other conductors due to inductive impedance. The same is true for the other locations (B, C, and D). The inductance is actually a distributed quantity and must be considered to be throughout the loop. The concept of partial inductance allows us to do this. 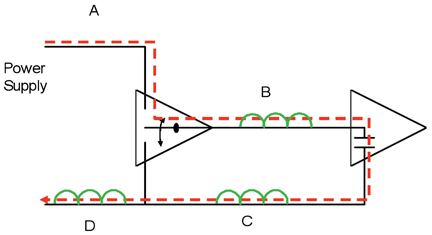 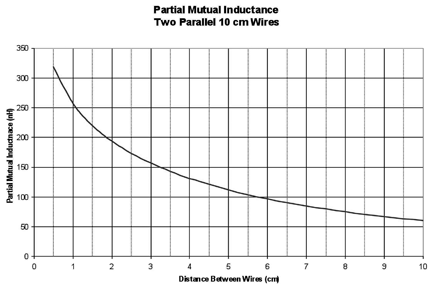 Figure 9: Example of partial mutual inductance of a pair of parallel wires

The basic principle that inductance requires current to flow in a loop is an important concept to understand. This is not unreasonable since current must flow in a loop. The size of the current loop determines the amount of inductance.

This has been a very brief introduction to inductance. A much more complete study of this subject is available in the references.

Dr. Bruce Archambeault and Sam Connor bring their experience at IBM to the issue of inductance and EMC, while Mark Steffka shares his expertise developed at General Motors.