Capacitors are among the most commonly used components on a circuit board. With the ever-increasing number of electronics devices (from mobile phones to cars), there has been a growing demand for capacitors. Covid 19 pandemic has disrupted the global supply chain of components from semiconductors to passive components, and capacitors have been in short supply1.

A discussion on the subject of capacitors could easily become a book or a dictionary. To start with, there are different types of capacitors such as electrolytic, film, ceramic capacitors, and so on. Then, within the same type, there are different dielectric materials. There are also different classes. As for physical construction, there are two-terminal and three-terminal capacitor types. There’s also an X2Y type capacitor which essentially is a pair of Y-capacitors packaged in one2. What about supercapacitors? The fact is, if you sit down and start reading the capacitor selection guide of major manufacturers, you could easily spend a day!

Since this article is about fundamentals, I will use a different approach as I would normally do. As mentioned before, a capacitors selection guide can be easily found with supplier websites3,4 and field engineers can often answer most of the questions about capacitors. In this article, rather than repeating what you can find on the internet, I will use practical examples to demonstrate how to select and use capacitors. Some lesser-known aspects of capacitor selection, such as capacitance degradation, will also be covered. After reading this article, you should have a good sense of using capacitors.

But first, let’s answer the most fundamental question, what is a capacitor?

A Capacitor from the Field Theory Point of View

Years ago, when I was working for a company making electronics devices, we had an interview question for power electronics engineers. On the schematics of an existing product, we would ask the potential candidates “What is the function of the DC link electrolytic capacitor?” and “What is the function of a ceramic capacitor that is located next to a chip?” We would expect the correct answer to be that the DC link capacitor is used for energy storage and the ceramic capacitor is used for filtering.

The “correct” answers we were seeking actually showed that everyone in the design team viewed a capacitor from the simple circuit point of view, not from the field theory. There’s nothing wrong with the circuit theory viewpoint. At low frequency (from a few kHz to a few MHz), circuit theory often explains things very well. This is because, at lower frequencies, signals are predominantly in differential mode. Using circuit theory, we can view a capacitor as that shown in Figure 1, with an equivalent series resistor (ESR) and an equivalent series inductor (ESL) causing the impedance of the capacitor to change with frequency. 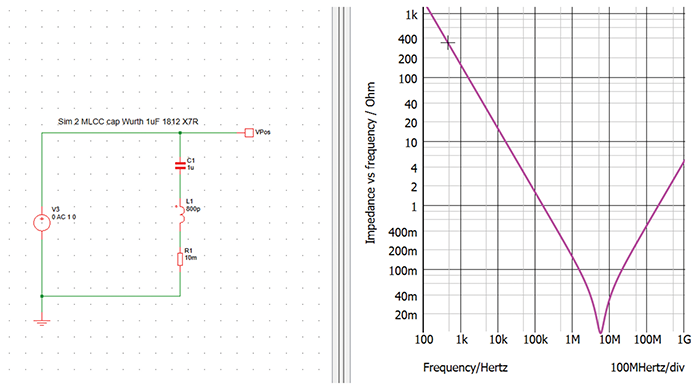 Figure 1: Spice model of an equivalent circuit of a ceramic capacitor and its impedance curve

This model explains the circuit performance adequately when the circuit switches slowly. However, as frequency goes up, things are becoming much more complex. At some point, components start showing nonlinearities. A simple L-C-R model has its limits when frequency increases.

From this viewpoint, we can simply define two performance criteria for a capacitor. One is how much energy a capacitor can store, the other is how quickly can this energy be delivered. Both depend on how a capacitor is made, the dielectric materials, the connection to the capacitor, and more.

When a switch is closed in a circuit (see Figure 2), it indicates that the load demands energy from the source. How fast this switch closes determines the urgency of the energy demand. As energy travels at the speed of light (half of this speed in an FR4 material), it takes time for the energy to be delivered. Besides, there’s an impedance mismatch between the source and the transmission line, and with the load as well. This means energy is never delivered in one trip but over many round trips5 and this is why, when a switch is switched fast, we see delay and ringing in the switching waveform. 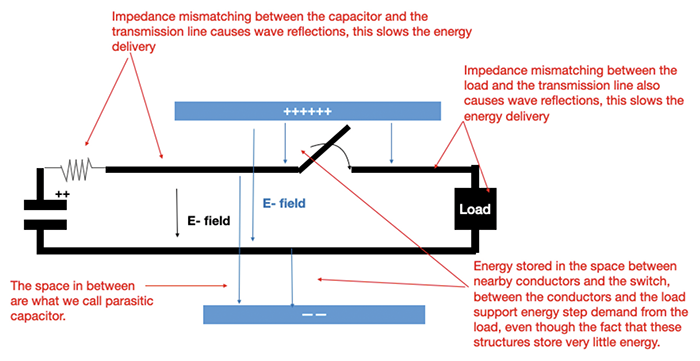 The fact that energy delivery takes time and many round trips tells us we need to locate the energy source as close as we can to the load, and we need to find ways of delivering it fast. The first is often achieved by reducing the physical distance between the load, the switch, and the capacitor. The latter is achieved by clustering a group of capacitors with minimum impedance.

We use the following examples to demonstrate how to use electrolytic capacitors, multi-layer ceramic capacitors (MLCCs), and film capacitors. Both circuit and field theories are used to explain the performance of the selected capacitors.

For EMC performance, the most important feature of a capacitor is the impedance versus frequency characteristics. Low frequency conducted emissions always depend on how good the DC link capacitor is.

The impedance of the DC link depends not only on the ESR and ESL of the capacitors but also on the hot loop area as illustrated in Figure 3. A larger hot loop area means energy delivery takes longer, hence the performance is compromised. 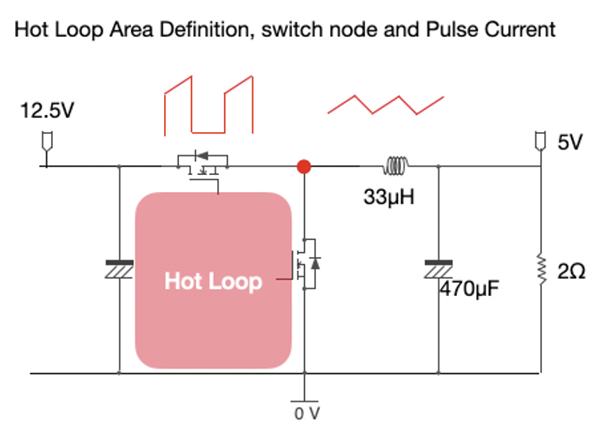 A step-down DC-DC converter was set up to demonstrate the point. A pre-compliance EMC test set-up shown in Figure 4 performs the conducted emission sweep between 150kHz and 108MHz. 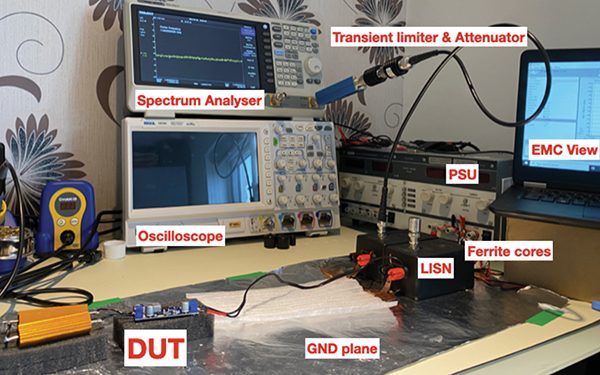 Three configurations for the input capacitors were tested:

It is important to make sure that the capacitors used in this case study were all from the same manufacturer to avoid impedance characteristics differences. When soldering the capacitor on the PCB, make sure there are no long leads as this will increase the ESL of the capacitor. Figure 5 shows the three configurations. 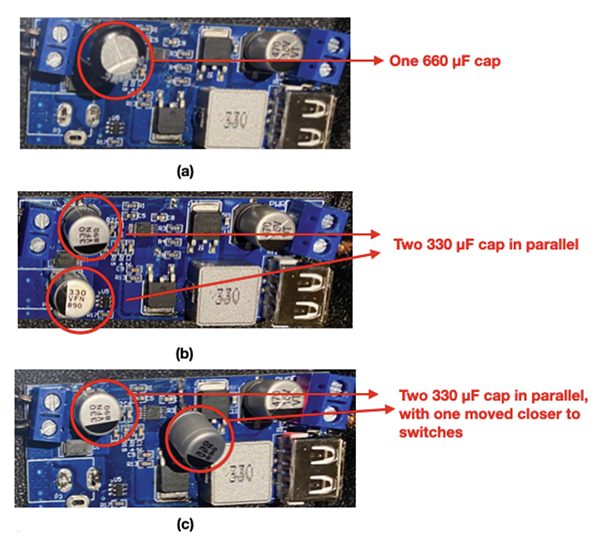 The conducted emission results of these three configurations are shown in Figure 6. As it can be seen, two 330 µF capacitors achieve 6 dB noise reduction performance across a wide frequency range compared with a single 680 µF capacitor.

From the circuit theory, one can say that, by having two capacitors in parallel, both ESL and ESR are halved. From the field theory, rather than having one energy source, two energy sources supplied to the same load effectively reduce the overall energy delivery time. However, at higher frequencies, the difference between two 330 µF capacitors and one 680 µF capacitor narrows. This is because high-frequency noise indicates an insufficient step energy response. When moving one 330 µF capacitor closer to the switch, we reduce the energy delivery time, this effectively increases the step response of the capacitor.

The results tell us a very important lesson. Increasing the capacitance of a single capacitor will not usually support the step demand for more energy. If possible, use a few smaller capacitance components. There are many good reasons for doing so. First is the cost. Generally speaking, the cost of capacitors increases exponentially with capacitance value for the same package size. Using one single capacitor is perhaps more expensive than using a few smaller capacitors. The second reason is the size. The limiting factor for a product design is often the height of a component. For capacitors with large capacitance, the height is often too big to be fit in the product design. The third reason is the EMC performance as we have seen in our case study.

Another factor to consider when using electrolytic capacitors is that balancing resistors will be needed when you put two capacitors in series to share voltage6.

As explained before, ceramic capacitors are tiny devices that can deliver energy fast. I often get asked the question “How much capacitance do I need?”. The answer to this question is that for ceramic capacitors, the capacitance value shouldn’t matter that much. The important consideration here is to work out at which frequency the speed of the energy delivery would be sufficient for your application. If a conducted emission failed at 100 MHz, then a capacitor that has the least impedance at 100 MHz would be a good option.

Here’s another misconception of MLCCs. I have seen engineers spend great effort selecting a ceramic capacitor with the least ESR and ESL, only to then connect the capacitor to the RF reference point via a long trace. It is worth knowing that the ESL of an MLCC is generally much lower than the connection inductances on the board. The connection inductance remains the single most important parameter affecting the high-frequency impedance of ceramic capacitors7.

A bad example of this is shown in Figure 7. The long trace (0.5 inch long) introduces at least 10nH inductance. Simulation results show that the impedance of the capacitor becomes a lot higher at the frequency point (50 MHz) than is intended.

One of the problems with MLCCs is that they tend to resonate with the inductive structures on the board. This can be seen in the example shown in Figure 8, in which the use of a 10 µF MLCC introduces a resonance at about 300 kHz.

You can reduce the resonance by including select parts that have larger ESR, or by simply putting a small value resistor (like one ohm) in series with the capacitor. Such methods use lossy components to damp the system. Another way is to use another capacitance value to shift the resonance either to a lower or a higher resonance point.

Film capacitors are used in many applications. They are the capacitors of choice for high-power DC-DC converters and are used as EMI suppression filters across the supply lines (both AC and DC), as well as in common-mode filtering configurations. We use an X capacitor as an example to demonstrate some of the key points of using film capacitors.

It helps limit the peak voltage stress on the lines if there is a surge event, so it is often used together with a transient voltage suppressor (TVS) or metal oxide varistor (MOV).

So, what has been happening? Damp air can leak into the capacitor, up the wires, and between the box and the epoxy potting compound. The aluminium metallization can then oxidize. Aluminium oxide is a good electrical insulator, thereby reducing the capacitance. That’s one problem all film capacitors can have. The problem I was talking about was the film thickness. Reputable capacitor brands use a thicker film, resulting in a larger capacitor than other brands. The thinner film makes the capacitor less robust to overload (voltage, current, or temperature) and less likely to self-heal as well.

If the X capacitor is not permanently connected to the supply, then you have less concern. For instance, for a product that has a hard switch between the mains and the capacitor, size is probably more important than lifetime and you can then choose a thinner capacitor.

However, if the capacitor is permanently connected to the supply, then it must be highly reliable. Oxidation of capacitors is not inevitable. If the capacitor epoxy material is of good quality and the capacitor is not routinely exposed to temperature extremes, value degradation should be minimal.

In this article, a field theory view of capacitors was first presented. Practical examples and simulation results demonstrate how to select and use the most common types of capacitors. Hopefully, this information will help you develop a more complete understanding of the role that capacitors play in electronics and EMC design.

The author would like to thank Mr. Steve Berry for his technical support on this subject.