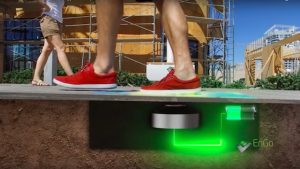 Las Vegas has always been known for its bright lights and gaudy appearance. Even in the middle of the night, the Strip lights up the desert with an assortment of signs and flashing neon images. It makes sense that the city would have a major interest in discovering alternative forms of energy, and this newest innovation takes advantage of their booming tourist economy.

A startup from New York called EnGoPlanet has created a revolutionary way to turn street traffic into a source of renewable energy. Special tiles have been placed along the sidewalk in Las Vegas’ highly popular Boulder Plaza. Under each kinetic pad, microgenerators exist that produce a surge of power with each footstep. Engineers have said each step can create anywhere from four to eight watts of energy. The kinetic energy of all those footsteps is then stored until nightfall, when it is transferred to streetlights in the area.  The result? Nevada nights are lit up thanks to countless pedestrian footsteps.

The innovative panels also draw solar energy from the sun, so even on days when tourists opt to stay indoors clean energy still abounds. The lamps themselves are lit with LED bulbs, which provide bright light while expending the least amount of power.

Renewable Energy is all around us but we do not have the right infrastructure in place to harvest that energy. Our research and development strategy focuses on the Smart Off-the-grid solutions and portable solar devices.

As if that’s not enough, EnGoPlanet (in conjunction with panel designer Pavegen) have made the location appealing to those out for a stroll: the lamps provide pedestrians with charging stations and free wi-fi. It’s a give and take approach to clean energy that Las Vegas has embraced — and other big cities may soon follow suit. Check out the video below to see the details of the Smart Street Light design, and get ready for a new step forward in clean energy.