Sleek Solar Energy Roofs Light Up The Homes Of The Future 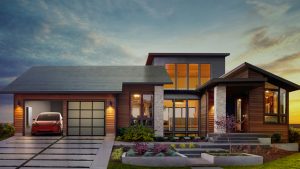 Solar panels have a lot of positive attributes, but style is not one of them. Their clunky design has been a major drawback; even those who support the idea of solar energy aren’t eager to have those ugly panels gracing their homes.

That’s why Elon Musk is so excited to give solar energy a serious makeover. The CEO of Tesla Motors has suggested we ditch the whole concept of solar panels and work on something far more attractive instead — solar energy roofs.

These sleek fixtures would not only provide solar energy, they’d look good while doing it. And style plays a big part in appealing to the masses when it comes to new technology. Solar roofing tiles would provide all the benefits of the panels, without the ugly architecture.

Musk’s plans for roofs that look completely unassuming but harness solar power is evident in Tesla’s recent acquisition of SolarCity. Engineers have managed to take the traditional solar panels powered by photovoltaic cells atop a glass panel and transform them into something far more effective and aesthetically appealing.

If all goes well, this could be an enormous boost for both Tesla and SolarCity. Although SolarCity is leading the field in residential solar energy, it’s had considerable financial concerns over the past few years. Tesla too has suffered some monetary setbacks despite moving forward with its electric car design, and now investing heavily in solar energy for the home.

By combining the need for solar energy with the growing popularity of electric cars, Tesla and SolarCity could be on the way to creating a bright (and aesthetically pleasing) future for homeowners across the country. Sales of the solar tiles for — available in 4 attractive styles — will begin by mid-2017. For more information (and a sneak preview of some of the features), check out this video from Tesla: