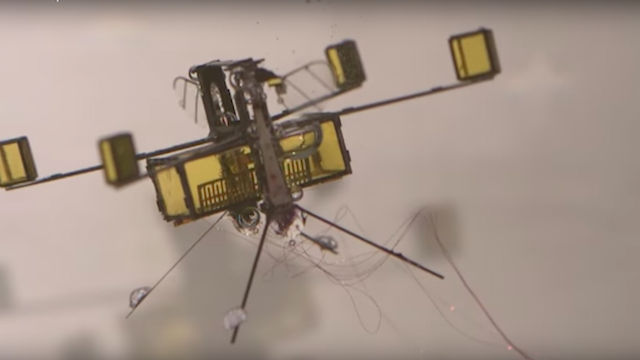 Scientists at the Harvard School of Engineering and Applied Sciences and the Wyss Institute for Biologically-Inspired Engineering have created a new and improved version of a robotic bee. This bee was first designed back in 1991 by student Robert Wood; the newest version has advanced by leaps and bounds, capable of feats that normal bees could never accomplish.

Known as the ‘RoboBee,’ this tiny robot is an impressive example of design technology. It comes with polymer wings based off of actual insect wings that allow it to fly through the air. The wings are powered by small ceramic devices. These devices take electrical pulses and convert them into kinetic energy. This means that the RoboBee holds the title as the world’s smallest flapping-wing aircraft.

It’s something of a tradition among students; every few years, a few intrepid engineers attempt to improve upon previous iterations of the RoboBee. The newest version is the most impressive to date. Not only can it fly, it’s also able to dive directly into the water, swim around, and then emerge back into the air. This is no easy feat for any robot, but RoboBee also has to contend with its minute size (it’s about 175 milligrams). The tiny robot must account for forces of surface tension, mass, and volume in relation to its diminutive frame. Plus it requires a system that allows it to propel through both water and air.

But it’s size is part of what makes it such a fascinating project for students. It comes in at about 1,000 times lighter than any other aerial-aquatic robot out there. The small size (and inherent problems that come with that size) make it a particularly challenging experience for engineers.

“The RoboBee represents a platform where forces are different than what we — at human scale — are used to experiencing,” he said.

Robert Wood, inventor of RoboBee and professor of engineering and applied sciences at Harvard

Despite its small size, the results of the work on RoboBee could have a big impact on other fields of study. The design has inspired advances in aerial-aquatic robots most often used for search and rescue expeditions. But at its heart, RoboBee remains a fascinating and singular example of pure engineering research.