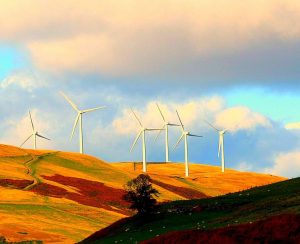 For the first time, renewable energy is the top power source in Scotland. A report by Scottish Renewables, the industry’s representative body, shows that clean energy produced 10.3 terawatt hours (TWh) in the first half of 2014. This is almost three times more power than nuclear, coal, or gas during the same time period. The Scottish government is optimistic that they will reach their goal of 100% renewable energy by 2020. Most of the country’s energy came from onshore wind and hydro, but there is potential to increase programs in offshore wind, tidal, and solar power. The government approved 500 new offshore wind turbines in October 2014.

Offshore wind and marine energy are still in the early stages of development but could make a big contribution to our future energy needs if they get the right support from government. That support includes the delivery of grid connections to the islands, home to the UK’s very best wind, wave and tidal sites.