First Successful Demonstration Of A 1 Petabit Per Second Network Node 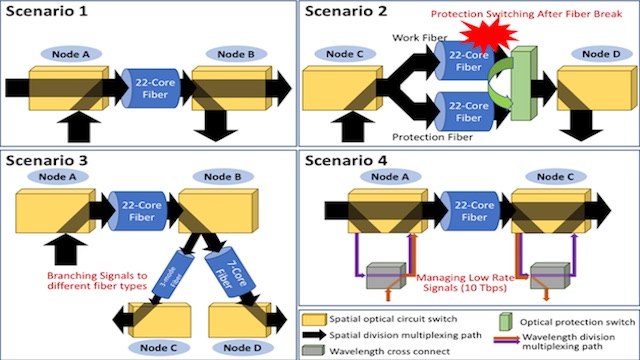 The National Institute of Information and Communications Technology (NICT) has successfully demonstrated the first network node capable of operating at 1 Petabit per second. This is the first large-scale optical switching testbed that has the power to withstand optical signals of 1 Petabit per second; a single Petabit has roughly the equivalent capacity of being able to send out 8K-TV video to 10 million people at the same time.

In order to perform the demonstration, a team of academia and industry used state-of-the-art large-scale and low-loss optical switches. These switches are based on MEMS technology. They also utilized three separate types of next-generation spatial-division multiplexing fibers. Additionally, they made sure to include the routing of signals with a capacity ranging from 10 Terabit per second to 1 Petabit per second, which adds up to more than 100 times the current capacity of modern networks.

Although Petabit-class transmissions have long been the goal of researchers, achieving this has been no easy task. Researchers were limited by the available technologies, which lacked the performance capabilities and complexity required for such large loads of data. The hope is that the new network can resolve these issues.

In order to determine whether their system could withstand the strain placed on an actual network, scientists incorporated practical requirements into their design, including protection switching. The system was demonstrated in four distinct, fundamental scenarios to prove its efficiency and effectiveness, even under real-world conditions. These included optical switching of 1 Petabit per second of data, the management of lower-capacity signals within the Petabit network, and branching of 1 Petabit per second signals into an assortment of different optical fibers of varying capacities and capabilities. The system was also subject to redundant configuration, which could prove important in the case of fiber breaks or network failures, and allow the network to continue to operate effectively.

The team behind the network will continue with their research in the field of ultra-high capacity telecommunications networks. Their research is part of a collaboration between researchers, government officials, and the telecommunications industry as a whole. The results of the demonstration were awarded a post-deadline presentation on September 26 of this year at the 45th European Conference on Optical Communications in Dublin, Ireland.