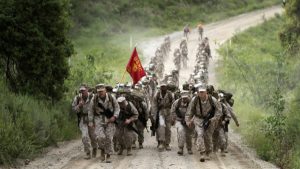 There is no doubt that Marines are physically fit, and now they are officially allowed to track their fitness progress. The United States Marine Corps is loosening restrictions on personal fitness trackers. Previously, this type of emerging technology was forbidden under blanket protection orders. Now, Marines are permitted to wear devices such as the Jawbone or Fitbit, even in areas that contain classified information.

There are still some restrictions and Commanders can prohibit fitness devices if they deem an area to be too sensitive. However, signs must be posted to warn Marines wherever fitness trackers are banned. USB accessories and external hardware or software modifications (such as installing third party apps) are not allowed. Otherwise, standard fitness trackers are approved. They must be commercially available in the U.S. or through a military exchange, marketed primarily as fitness or sleep devices, and designated as a Federal Communication Commission Class B digital device. The following features are permitted: Bluetooth, GPS (in receive only mode), accelerometer, altimeters, gyroscopes, heart activity monitors, vibration features, and near-field communication capabilities.

Smart watches such as the Apple watch are not approved. The Marine Corps still prohibits devices that contain cellular or Wi-Fi, photo/video, microphone, or audio recording abilities (disabling these features isn’t good enough). These features could enable military personnel to inadvertently leak classified and sensitive information, such as the time that a Chinese soldier used his smart watch to take a photo of his fellow soldiers.