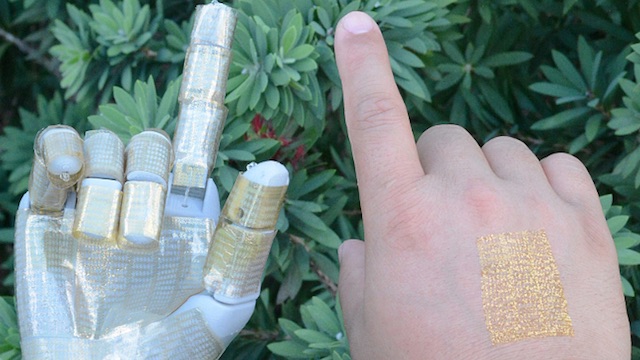 Scientists from the University of Houston have created a new type of wearable electronic device that is so thin and light, users won’t even be able to tell they’re wearing it. The device is multifunctional, and experts believe it could potentially have a wide range of different applications, from robotics to the medical world.

Wearables are an increasingly popular field of research and can have a vast variety of different uses. However, many of the current designs suffer from being bulky and uncomfortable. Additionally, some suffer from slow response times and a decrease in performance over the lifespan of the device. And while flexible wearables are slowly coming into their own, they simply can’t provide multiple functions at once, which can prove frustrating to users. These also come with the added complications of being difficult to manufacture and expensive to produce.

So scientists decided to try a different route for creating wearables. They took a metal oxide semiconductor and placed it on a polymer base. The design can be processed at temperatures lower than 300 degrees Celsius and is significantly easier to manufacture than other devices currently on the market. It is constructed in a single step and based on sol-gel-on-polymer-processed indium zinc oxide semiconductor nano-membrane electronics.

The new technology is ultrathin and stretchable and can be worn directly on human skin. It is capable of capturing multiple forms of physical data simultaneously, which would make a big impact in the medical field. Perhaps most impressive, it is light enough that users can barely feel it at all — just a few microns in thickness.

But humans aren’t the only potential users of this new wearable. Researchers are exploring the potential of utilizing this technology to create prosthetic skins for robots that would have the ability to collect information by simply touching a human being.

“What if when you shook hands with a robotic hand, it was able to instantly deduce physical condition?”

Cunjiang Yu, Bill D. Cook Associate Professor of Mechanical Engineering at the University of Houston and lead author for the paper

Scientists will continue to work on improving and streamlining this technology. They also hope to customize it for a variety of different applications, creating a wearable technology that is not only lightweight and comfortable, but capable of performing multiple functions at the same time.