Lighting a Path to the Commercialization of Micro LEDs 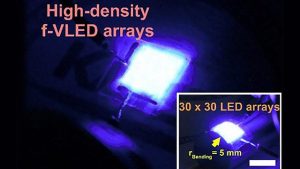 Credit: The Korea Advanced Institute of Science and Technology (KAIST)

While LED pixels are extremely versatile, there are certain factors that have made it hard to commercialize them. The display industry utilizes the chip transfer of millions of individual LED pixels, which results in high production costs. This dramatically reduces the potential market for micro LED TV. Researchers then began to devise a new method for using LEDs that was far more cost-effective.

In order to commercialize micro LEDs, a number of factors must come into play. The transfer method of thin film micro LEDs demands a one-time transfer of a million LEDs. These thin-film blue micro LEDs are essential for a full-color display. The team had previously worked on creating thin-film red f-VLED, and relied on this prior experience to transfer thousands of thin-film blue vertical micro LEDs on plastics.

The results of this work are blue GaN f-VLEDs that achieve optical power density up to three times higher than lateral micro LEDs. Additionally, the device lifetime has been extended to 100,000 hours by reducing the generation of heat. These f-VLEDs could be included in flexible wearable devices and operated by wirelessly transferred electrical energy.

“For future micro LEDs, the innovative technology of thin-film transfer, efficient devices, and interconnection is necessary. We plan to demonstrate a full-color micro LED display in smart watch sizes by the end of this year. ”

Further testing and research are required, but researchers are certain that these innovations will help to further the commercialization of LED micro TVs as well as a host of other LED applications.