Impurities Improve the Performance of Lasers 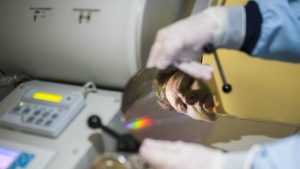 While attempting a different experiment, they added atoms of zinc to lasers made of gallium arsenide. They were surprised to discover that the addition of zinc made the laser’s light 100 times better. ANU Researcher Tim Burgess said:

Normally you wouldn’t even bother looking for light from nanocrystals of gallium arsenide – we were initially adding zinc simply to improve the electrical conductivity. It was only when I happened to check for light emission that I realized we were onto something.

Gallium arsenide is already commonly used to make lasers, photovoltaic cells, and light-emitting diodes (LEDs). It turns out that doping the material with zinc not only increases the amount of light that lasers emit, but also gives it a very short carrier lifetime, which makes it an excellent candidate for high speed electronics components. The research is described in a paper that published in Nature Communications.