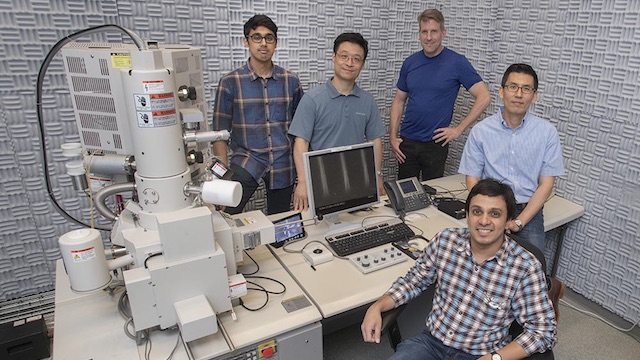 Scientists from Stony Brook University’s College of Engineering and Applied Science alongside researchers from Brookhaven Lab have uncovered some important findings that could help to create the next generation of ultra-small electronics. Researchers joined forces to create a new hybrid of organic and inorganic materials that allow for the transfer of incredibly small, high-aspect-ratio features directly into silicon. These new findings could pave the way for a new generation of ultrasmall, high-tech devices.

In order to reduce power consumption while simultaneously increasing the processing speed of electronic devices, microelectronics researchers have been attempting to create devices that are smaller than ever before. The transistors found in modern cell phones are a mere 10 nanometers long, or sometimes even smaller. That equals the width of roughly 50 silicon atoms, yet scientists are seeking even smaller transistors for future technologies.

However, this has not been without its share of difficulties. To achieve these small sizes while maintaining accuracy demands advanced materials for lithography to be successful. Lithography is known for being the common technique used to print electrical circuit elements directly onto silicon wafers in order to successfully manufacture electronic chips. Part of the problem is that scientists need to create sturdy resists to ensure that the process will work. Resists are materials that operate as templates, allowing for the transfer of circuit patterns onto substrates like silicon.

Researchers tried out a new method to combine organic and inorganic materials so as to create resists. By using infiltration synthesis, scientists were able to join together inorganic aluminum oxide with the organic polymer poly(methyl methacrylate), better known as PMMA. While PMMA has the advantages of high resolution and low cost, the resist thickness required to generate ultrasmall feature sizes has proven a problem. At that size, the patterns start to degrade and are unable to produce the necessary height aspect ratio.

However, by joining it with the inorganic aluminum oxide, scientists were able to create a hybrid capable of achieving high-resolution silicon nanostructures while maintaining the all-important height aspect ration. Scientists found they could also tune the material depending on the applications simply by changing the quantity of the inorganic element that is infiltrated into the PMMA.

Scientists intend to continue to research these findings, in the hopes that these hybrid resists will provide them with further insight into creating incredibly powerful — and unbelievably small — electronic devices in the future.