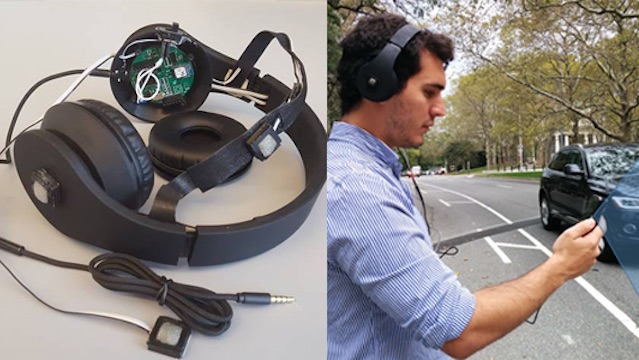 Researchers at the Data Science Institute at Columbia University are designing a new type of headphone capable of alerting pedestrians to oncoming vehicles and other dangers. This intelligent device could help to reduce the number of headphone-wearing pedestrians who are injured each year by oncoming vehicles they fail to hear because they’re looking down at their phone. Deaths and injuries as a result of walking while texting have tripled in the last seven years, and researchers hope that their new technology could help reduce that number.

The new headphones will come equipped with miniature microphones as well as intelligent signal processing. The system can pick up sounds of approaching vehicles; should it detect an impending danger, an audio alert will sound through the headphones, letting the user know that they should be aware of their surroundings.

Researchers are in the process of testing and developing prototypes of the new headphones. To see how the technology operates in real-world settings, the team has taken to the streets surrounding Columbia University. Once they’ve completed the process of developing and thoroughly testing their new system, researchers are hopeful that it could prove effective in keeping people safe even while they walk and text.

“We are exploring a new area in developing an inexpensive and low-power technology that creates an audio-alert mechanism for pedestrians.”

But there’s a long way to go before this dream becomes a reality. The headphones are a complex piece of machinery; in order to operate effectively, researchers must embed multiple tiny microphones directly into the headset; additionally, the team is working to develop a low-power data pipeline. This technology would allow the device to process the sounds occurring around the user. The data pipeline must also be able to determine which noises indicate potential danger, and which do not. In order to achieve this, researchers are using custom-integrated circuits that are ultra-low power. This will give the pipeline the ability to pick out significant sounds without using a significant amount of battery power.

The research team hopes that once that have fully realized their vision for the headphones, they’ll be able to commercialize their technology and provide people with a new way to safely walk and text at the same time.