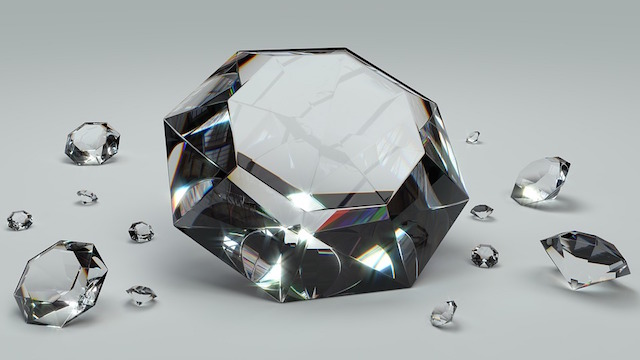 Diamonds are more than meets the eye. True, they’re flashy and elegant (and a great anniversary gift), but that’s just on the outside. Their inner treasures hold far greater value — and scientists have created a whole new class of gems that have a whole lot more to offer than we ever imagined.

Geochemists from the University of Bristol have created a remarkable new type of diamond from nuclear waste. What’s more, these artificial diamonds can create their own electrical current and have a half-life spanning up to 5,800 years — making for a truly impressive new energy source. Scientists believe that transforming the dangerous nuclear waste into a clean source of energy could help solve multiple problems with one single solution.

The question of what to do with nuclear waste has long been a serious concern; now, geochemists believe that they’ve created an elegant and useful system for dealing with that hazardous material. The scientists demonstrated this new technology by powering a battery made from the artificial diamonds, which uses the unstable isotope of nickel-63 as its source for radiation. With a wonderfully long half-life, the scientists believe they’ve discovered a new source of clean energy that could last for generations.

This no doubt comes as a relief to the many people who have been worried about what to do with excess nuclear waste. Hundreds of tons of the material need to be disposed of in a way that doesn’t negatively impact the environment, or at the very least monitored closely. Scientists have instead opted to repurpose this problematic material and turn it into something useful.

The batteries constructed from these artificial diamonds won’t be powering any high-strength projects; instead, scientists think they will be best used on devices where a regular battery simply won’t do. For technology that needs a low charge for a long time (such as pacemakers), these diamond-based batteries could prove to be lifesavers.

Geoscientists are still experimenting with the practical applications of their discovery, but they believe that soon we’ll have a reliable and long-last power source. It’s proof that with science, you can take hazardous waste and turn it into something truly priceless — a clean source of energy.