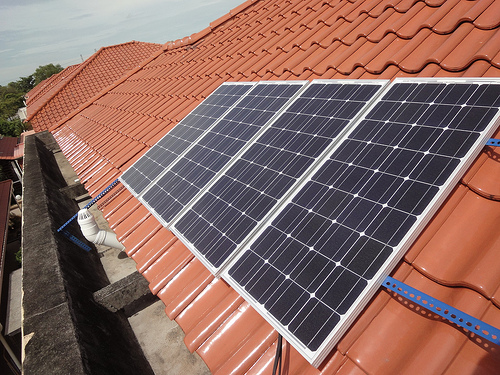 Researchers in England say they have developed technology that could transform solar power using perovskite—an inexpensive material with excellent electronic properties. Perovskite solar technology has drastically improved in just a short period of time. When researchers started working with it for solar cells in 2010, they measured an efficiency of four percent, but in 2014 labs had already improved perovskite’s efficiency to 20 percent, which rivals existing silicon-based solar technologies. Henry Naith, a researcher from the University of Oxford, has now started a company called Oxford PV to commercialize this wonder material. Naith and his colleagues are working on a perovskite film that can be applied to conventional silicon solar cells to get the best of both materials.

Silicon has been the go-to material for solar cells, but they only capture sunlight at certain wavelengths, and the material is expensive. Perovskite can absorb sunlight at slightly different wavelengths, so combining the two materials help cells take advantage of a wider range of the spectrum. Better yet, perovskite is easy to produce, so it is less expensive than silicon.

Other research groups around the world have developed similar solar devices that combine silicon and perovskite, but Naith’s group has demonstrated much better efficiency. The perovskite they developed in the lab fills in the gaps in the range of the solar spectrum that silicon misses. Their results, which are published in Science, suggest that that it will be possible to make a silicon-perovskite solar cell that is five percent more efficient than today’s silicon cells. Before the technology is ready for commercialization, however, the researchers will have to make sure the perovskite—which is sensitive to moisture and air—can withstand real world conditions.