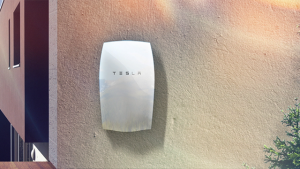 Elon Musk wants to fundamentally change the way the world uses energy. Late last night the Tesla Motors CEO unveiled a battery system that he says could be the solution to the world’s energy crisis. The hype for Tesla Energy has been building ever since Musk alluded to it in an investor call earlier this year, and the product launch didn’t disappoint. The battery system can work for homes, businesses, an even utilities.

At a press event last night, Musk’s keynote speech evoked climate change by displaying the Keeling Curve, a graph that charts the rate of growth of carbon dioxide in the atmosphere. It is a steep curve that just keeps rising, a stark visual that shows how the rate of growth in CO2 concentrations in atmosphere have accelerated over time. Musk, however, said he believes that it is possible to flatten the curve if we drastically reduce or even eliminate fossil fuels by transitioning to solar and other sustainable power sources. In order to do that, Tesla offers two new battery systems—one for homes and another for businesses and utilities.

When describing the home battery system, Musk made grandiose promises that could have come right out of a political speech. He said the system, called Powerwall, provides personal security and independence, as it can be used as a backup energy supply or to go off the grid completely. He also said the home battery system could offer a solution for people in remote areas who don’t have electricity today.

Powerwall uses electricity generated from solar panels, offering a way to store the sun’s peak energy from the middle of the day so it can be used to power homes at night, when electricity rates are often the highest. It is a four-foot tall, 350-450 volt battery that can mounted outside or inside homes. It is UL listed, with integrated thermal controls and a DC-to-DC converter. The system is surprisingly affordable— just $3,500 buys a 10 kilowatt hour (kWh) version, which should supply plenty of backup power, since the average American household consumes 909 kWh per month, according to the U.S. Energy Information Administration. Additionally, Powerwalls can be stacked together for homes or small businesses that need more power. Tesla is taking preorders online now, with deliveries expected to begin this summer.

The second new product, Powerpack, is a scalable system for commercial applications or—and here’s where it gets exciting—public utility companies. Powerpack comes in 100 kWh battery blocks that can scale from 500 kWh all the way up to 10 MWh and higher.

Musk proposed that this “gigawatt-class battery system” could eventually be used to eliminate dependence on fossil fuels by transitioning to 100 percent sustainable power sources. One pack, he said, could power a small city such as Boulder. It would take 900 million Powerpacks to store enough energy for the world’s electricity, or two billion Powerpacks could replace all of the world’s electrical, heating, and transportation needs. Although that sounds like a ridiculous amount of batteries, Musk pointed out that the same number of cars and trucks are on today’s roads, so two billion is actually a reasonable goal.

In order to produce enough batteries to change the way the world produces and uses power, Musk said many other companies will need to build “giant machines” like the giant lithium-ion battery Gigafactory 1 that Tesla is currently building in Nevada. If storing solar power in batteries is scaled as much as Musk proposes, it could drastically reducing carbon emissions.  This, he says, “is something that we must do, and that we can do, and that we will do.”