The obvious solution to a problem isn’t always the best.

For example, will making a grounding rod longer or a grounding system bigger always reduce the risk of lightning damage? Reality may be different from expectations.

One way to set expectations is to study the effect of a ground rod on the waveshape of a surge, which can tell us a lot about how the ground rod is behaving. Standards have advice on this. For example, based on a reading of the IEC 61312-1 [1] standard, we might assume that the waveshapes of the current flowing in the grounding system and that flowing in the electrical circuit are the same – implying that the grounding system is simply a resistance. But is that really the case? 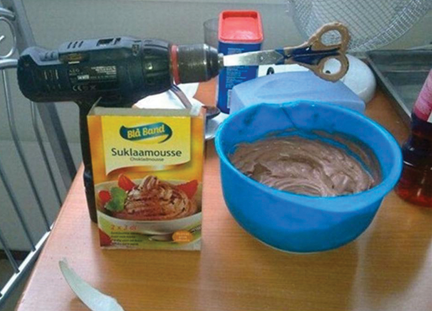 The obvious solution to a problem isn’t always the best.

For another view, consider the work of Rakov, Uman and their associates at the Camp Blanding triggered lightning facility in Florida. They have a facility with a launch tower [for rocket-induced lightning] and an instrumented building. They have shown [2] that the waveshapes of the currents in the grounding system and those entering the building electrical circuits are considerably different [in their case for a subsequent surge]; and they attribute the difference to the performance of the ground rods in the two cases.

That observation suggests that we need to look more closely at the effects of ground rods on an incident lightning waveform. Maybe ground rods can act differently than the IEC expects. From the recorded waveforms of the currents at the launch tower and at the ground rods, Rakov et al found that the surge currents in the ground rods have a much faster rise time and a much shorter duration than those of the incident surge. (As explained in the January 2005 IEEE Transactions on Power Delivery [3], this lightning is mostly subsequent strokes.)

So what’s going on? The short explanation is that the ground rods used in the study by Rakov et al [2] are acting like lossy capacitors – probably not what most of us would expect. This observation also suggests that ground rods may have other behavior that we don’t expect, so let’s look at what is known about them.

Short ground rods are most likely to be found at residences. A number of groups ([6][7][8]) have estimated the capacitance of short ground rods, with estimates running around 3.3 nF for a 2 m long ground rod.

Using a linear approximation for l/a, (1) can be written:

Now consider a subsequent surge, since that has the fastest rise and fall times, and is most affected by the reactance of the ground rod. A typical short ground rod is 2 m long. This ground rod in low resistivity (50 ohm-m) and high resistivity (3000 ohm-m) soil would have a resistance of about 25 ohms and 1400 ohms, respectively. Using these resistances and a capacitance of 3.3 nF, the response to a subsequent surge as characterized in [3] is shown in Figure 1. This figure shows that a ground rod in low resistivity soil is characterized by a modest slowing of the rise time of the surge. The curve for the 3000 ohm-m soil has a much greater slowing of the rise time and a higher amplitude than that of the 50 ohm-m soil because the resistance of the ground rod is higher, leading to a higher voltage for the same reference current. 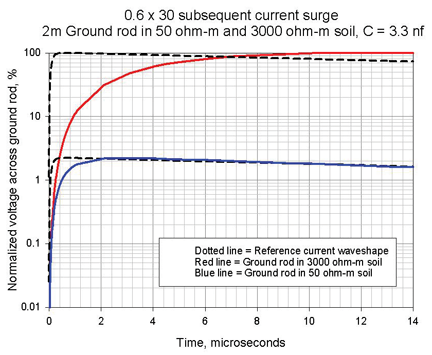 Figure 1: The voltage developed across a short (2 m) ground rod for a typical subsequent surge current

Long ground rods may be driven at commercial structures to lower the surge resistance to ground. Long horizontal ground wires and grounding grids also fall into this category. These have been characterized using transmission line analyses; e.g. Verma [10] for ground rods and wires, and Gupta[11] and Grecv [12] for grounding grids. As pointed out in Grecv, circuit-based models tend to overestimate voltages compared to transmission line models. But in that sense, circuit-based models are conservative.

Transmission line analysis is necessary for very long grounding systems (e.g. over 30 m) and any system in which reflections from discontinuities is important. For ground rods that are not too long (e.g. less than 30 m), it is simpler to calculate the inductance of the ground rod and then calculate the response of a series R-L circuit. The inductance of the ground rod is given in Verma as: 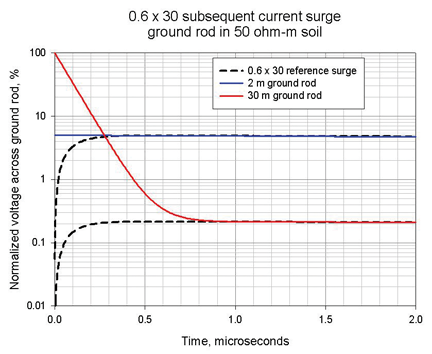 Figure 2: The voltage developed across various ground rods by a subsequent surge in low-resistivity soil 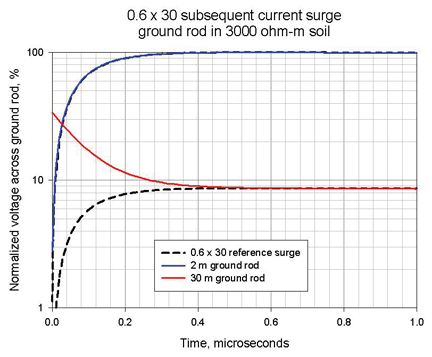 Figure 3: The voltage developed across various ground rods by a subsequent surge in high-resistivity soil

The Practical Effect of Ground Rods

We have seen how, from a surge standpoint, ground rods can be either capacitive or inductive in nature, depending on their length and the resistivity of the soil. The practical effect of a ground rod depends on the frequency content of the incident surge. A double exponential of the form
exp(−at) − exp(−bt) can be represented in the frequency domain as 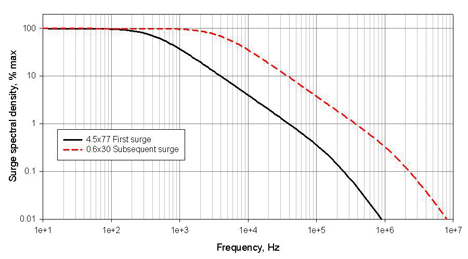 What is clear from Figure 4 is that the high amplitude part of both the 4.5×77 and the 0.6×30 surges is concentrated at low frequencies. At low frequencies, a ground rod is essentially resistive. Since resistance decreases as the length of a ground rod increases, a long ground rod helps to reduce the specific energy (Amp2sec) of the surge by diverting the relatively high-amplitude, low-frequency components to ground. But a long ground rod looks inductive at higher frequencies, and this effect can lead to potentially damaging voltage spikes. So at what length does the inductive effect become important?

The Concept of Impulse Coefficient and Effective Length 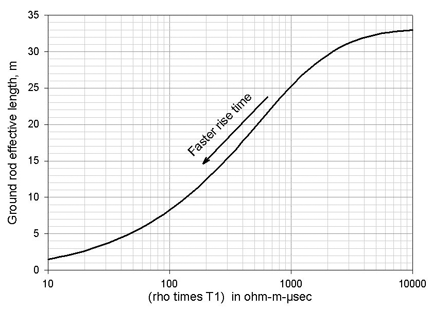 Figure 5: Variation in the effective length of a ground rod with soil resistivity and the zero-to-peak time of the surge

where A = Z/R is the impulse coefficient (defined as the ratio of peak voltage to the peak voltage across a purely resistive ground rod or wire) and R = ground rod resistance.

For A > 1, the ground rod has a series inductance in addition to its resistance. In this case, the peak voltage will be A times bigger than it would have been if the ground rod were purely resistive.

For A < 1, the ground rod has a parallel capacitance in addition to its resistance. In this case, the peak voltage will be A times lower than it would have been if the ground rod were purely resistive. 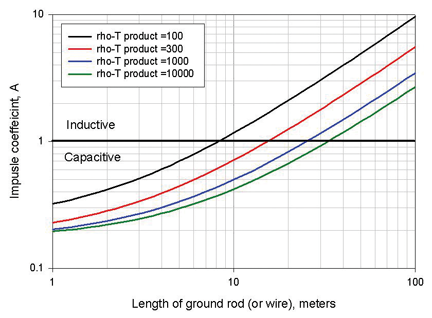 Figure 6: Impulse coefficient versus length of ground rod (or wire)

Back in the beginning we said that the work of Rakov et al [2] was at odds with the IEC 61312-1 statement that the wave shapes of the current flowing in the grounding system and that flowing in the electrical circuit are the same. Now we can see that in order for the IEC 61312-1 statement about wave shapes to be valid, it must also be assumed that ground rods are purely resistive. Here we have shown that ground rods are resistive only under some conditions and that, in general, they also have a reactive component which can significantly affect the wave shape of the surge voltage, especially for subsequent surges.

The point is that when we think of grounding systems, we tend to think only of resistance and how resistance can be reduced. But the things we do to lower resistance may increase inductance, which could actually make matters worse, especially for fast-rising secondary surges. This is something to bear in mind when designing protection.