What Can We Learn From Testing Actual VSD-Driven Products

Editor’s Note: The paper on which this article is based was originally presented at the 2020 IEEE International Symposium on Product Safety Engineering held virtually in November 2020. It is reprinted here with the gracious permission of the IEEE. Copyright 2021 IEEE.

Nuisance tripping of GFCIs (Ground Fault Circuit Interrupters) has given rise to questions about the role of conducted emissions from equipment using switching methods, such as VSDs (Variable Speed Drives), in causing a GFCI to trip. An earlier paper [1] described a test condition where several GFCIs would trip inadvertently under an applied Electrical Fast Transient (EFT) impulse; this false-positive result is normally considered nuisance tripping since the tripping cause was not determined. This follow-on paper provides additional data from testing aimed at looking at the line conducted emissions and ground lead touch current from some units while under actual operation using GFCIs.

Note that most GFCIs use the difference in line and return current to trigger protection; however, a common electric shock is from current in the earth/ground lead when this lead is not properly grounded. The differential line current is then a proxy for the earth/ground current hazard.

Although GFCIs could be tripped by test signals, having the actual signals being generated by the operating product would potentially provide specific threat information affecting GFCI operation that needs to be mitigated.

Some manufacturers were contacted and invited to supply residential or commercial units to be used for investigating these threats. Three such products were supplied for this evaluation.

For one of the products, the user had full control of the VSD in operating the unit. This product evaluated in this follow-on student GFCI research project had been involved in nuisance tripping complaints where the unit would not work when connected to one GFCI protected outlet but would work when connected to another outlet (each outlet separately GFCI protected, a common practice for electrical outlets provided on construction sites).

For the other two, the provided units operated from a programmed cycle which made the data collection more time-consuming and difficult as the VSD drive conditions changed throughout the duration time of the cycle.

This small collection of equipment tested provided substantial data which is summarized in this paper.

Electric shock is the physiological reaction or injury caused by electric current passing through the body. Figure 1 shows the effects of bipolar/AC current in terms of its magnitude and duration of time on the human body [2]. The summary provided in Figure 1 for each effect vary from person to person with the average values being highest for men, then women, then children [3]. The average startle-reaction level, 0.5 mArms/7.07 mApk, is the threshold value of current which can cause an involuntary reaction. The letgo-immobilization level, 5 mArms/7.07 mApk, is the maximum amount of current that can flow through a person who is experiencing electrical shock where he or she can still release and disconnect from the charged object. Currents above 5 mArms/7.07 mApk cause involuntary muscle contractions resulting in perspiration which lowers the body’s resistance and increases current through the body [4]. 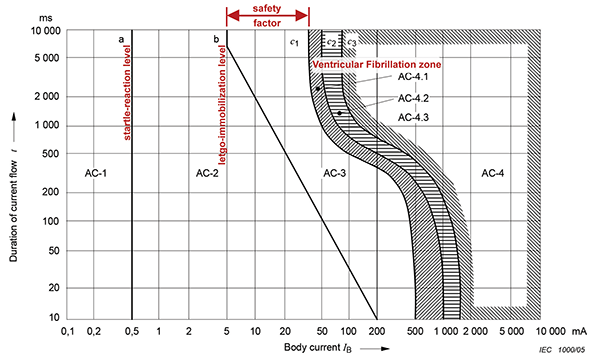 Preventing currents from exceeding the letgo-immobilization threshold is important because more severe ventricular fibrillation can occur at currents as little as 30 mArms and cause death without medical intervention, especially CPR.

Variable-speed drive (VSD), describes an electronic controller used to control the speed of motors in equipment. Many products are expected to operate at different speeds depending upon their different usage. Where process or operational conditions demand adjustment of flow from a pump or a fan, varying the speed of the drive may also save energy compared with older techniques for control.

Variable speed drives can work with both AC and DC motors. Power electronics based VSDs are rapidly replacing older technologies for this purpose. VSDs provide smoother speed change for motors than older technologies as well as better operating efficiency. However, the electronic switching used also generates substantial harmonic impulses which conductively feedback into the line supplying power to the motor. The purpose of this work is to study this feedback.

Two sets of tests were run on each machine during operation; the touch current (earth/ground wire leakage current) test and the test of the conducted lines feedback flowing back into the power line feeding the unit. GFCIs were used during the testing confirming nuisance tripping conditions during normal operation.

During the touch current testing of the direct VSD driven unit, some of the GFCI units reported earlier [1] tripped in two instances during the operation under specific operating conditions. The determination of any particular part of the input signal which tripped the GFCI could not be determined. The programmed units, however, did not trip the GFCIs, although, unfortunately, it was determined after the testing that some conducted emission mitigation had already been implemented in these units. The EMC filters added are intended to reduce the high frequency components fed back on the line. 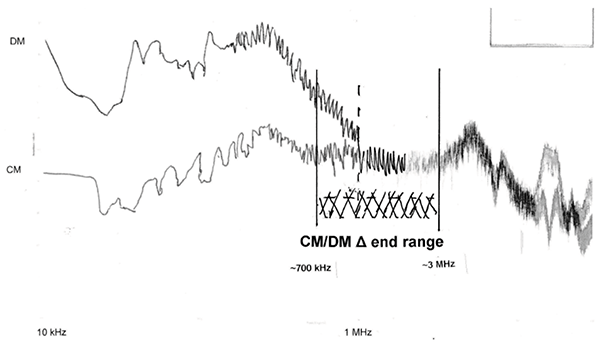 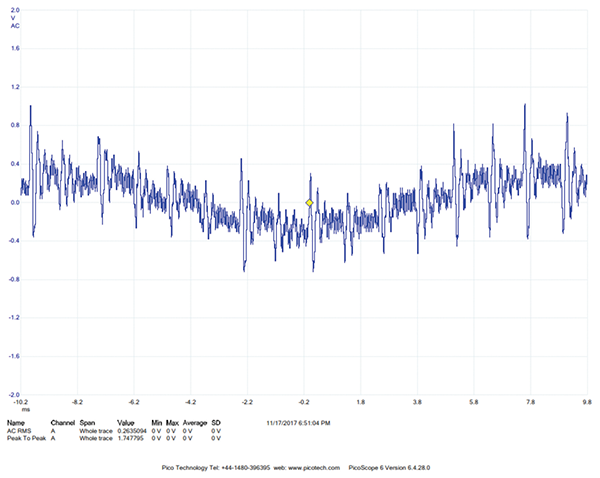 Working between the time and frequency domain is well understood analytically but not used much in practice traditionally by some electrical engineers.

Here is a simple analytical example to help bridge these two domains. This example is for a line frequency triangular waveform which is a non-sinusoidal waveform.

In this analysis, the assumption is that the Device Under Test (DUT) driven by a non-sinusoidal waveform capacitively couples some of this waveform into earth/ground which becomes the input for this analysis. The analysis shows the IEC Touch Current test circuit (Figure 4 lower circuit diagram and SPICE input conditions) used to capture this electric shock component to determine whether the residual current in the earth/ground lead is acceptable for electric shock protection as discussed earlier.

The triangular waveform in the upper part of Figure 4, the blue Input waveform, is the earth/ground complement of the Differential Mode current used by a GFCI to determine when to open the circuit. The red Output/500ohm Touch Current waveform is the Dalziel inverse filtered waveform used to determine whether or not the Touch Current is below the Dalziel letgo-immobilization limit of 7mApk (this method of measurement conveniently reduces the measurement in a way that outputs a value which allows the low frequency Dalziel value to be used for comparison). 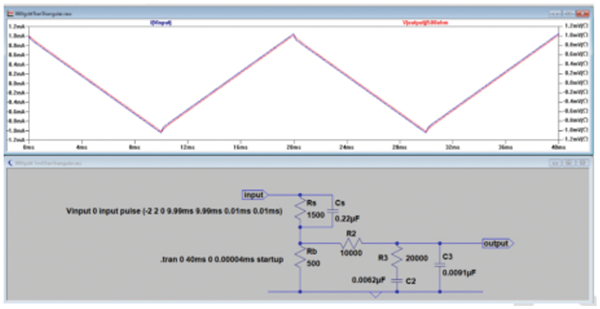 Note that the Input current and the Touch Current (= voutput/500ohms) waveforms look quite similar.

The FFT frequency components of the Input waveform are show in Figure 5.

Finally, note that for each FFT waveform a little more than half of the total current value is contained in the fundamental (first harmonic) peak.

For this simple waveform example there is a monotonic decrease of current as the frequency increases. Contrast this to Figure 2 DM current which does not exhibit the same type of behavior.

The frequency domain conducted emissions are shown in Figure 2. For one product, the full set of data is displayed and, for the other two units, the plot is annotated to illustrate the range of frequencies where the CM (Common Mode) and DM (Differential Mode) signals come together indicating that there is no significant difference showing escaping current above this frequency. This unique presentation (a feature of this paper) is a combined comparison of two separate data runs showing the CM and DM plots overlaid; the low frequency data for the full dataset has been hand enhanced from the original scans as they were hardly readable (enhancement simplified, does not fully follow the twists and turns). Note that the DM current is the inverse of the touch current measured in the earth/ground lead as described earlier. Also note that the scan starts at 9kHz; below a 10kHz start for some common EMC measurements.

Also note that the scans merge in the range of 1 MHz or so, which applies to all of the units tested; however, there is plenty of HF signal remaining above the 1MHz frequency.

1MHz is mentioned as this is the historic or traditional division of responsibility between product safety and EMC requirements. However, this division is being abrogated going both directions as with the introduction of many high frequency switching devices into products and increased concern for technical interference at lower frequencies.

The DM conducted emissions feeding back into the powerline provide the signal evaluated by the GFCI to determine when to open the line to prevent an electric shock to a user contacting the equipment in a grounded environment. The GFCI uses the DM signal as a proxy for the touch current, assuming all the missing current is going to ground, most likely through a person. 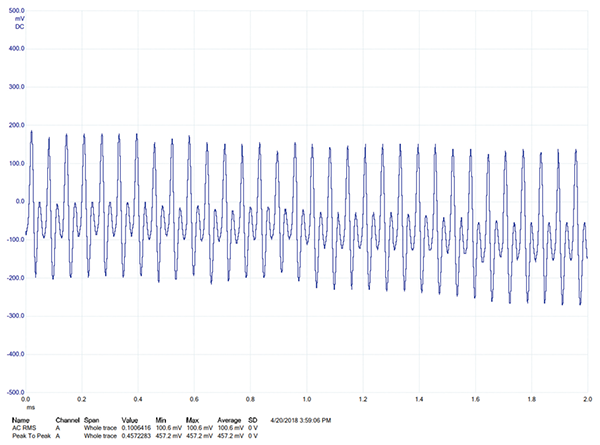 The time-domain touch current in the earth/ground lead for the NORMAL operating condition is shown in Figure 3. There is significant HF content in this waveform; the VSD switching spikes are clearly seen in this plot.

As reported in the testing carried out for this research, one unit tripped two of the GFCIs under specific test conditions; neither of these GFCIs were the devices reported tripping in the earlier paper [1]. The other units did not trip any of the GFCIs tested, even though the manufacturer submitted them because they had GFCI issues in the field; it was admitted at the end of the project that EMI mitigation had been applied to each of them.

The two programmed units tested changed the VSD drive conditions as the programmed operation continued through its cycle. Figure 8, in the Appendix on page 32, captures one of those cycle changes and it is clear that there is additional high frequency noise developed during the 2nd half of the touch current plot.

From this study we clearly observe the wide range of high frequency components in the switching signals of VSD driven motors. These conducted emission signals that pose a threat, fed back from units under test into the output of the GFCI protective device, extend well above 1MHz (the traditional division of responsibility between product safety and EMC work).

The high frequency signals have to be taken into account to achieve proper control of both the electric shock safety as well as the equipment performance on the power grid. These broadband signals pose threats by interacting with the GFCI protection circuit, but, since they are not expected, they are not specifically evaluated as to whether or not they exceed the Dalziel letgo-immobilization limit as expanded by the known Frequency Factory to high frequency. This phenomenon gives rise to this unexpected result, nuisance tripping of GFCIs, which is a technical problem that needs to be clearly investigated and for which this paper provides substantial data to further pursue this investigation.

Finally, it is important to point out that the conducted emissions feedback issue is not an isolated problem in any way. The referenced paper by LeFrink [5] provides a good history of the development of Conducted Interference Challenges within Europe and discusses cases similar to those discussed in this paper. The paper by Zheng and He [6] describe the analysis of a SMPS circuit looking at the CM and DM conducted emissions, as presented in this paper, showing that it is a serious enough issue to the Chinese development of consumer and commercial equipment that reinforces that this study is important.

The programmed appliances worked through their cycles based upon an internal schedule.

Even though the testing process was searching for the worst-case touch current, the machines could not be held in any specific cycle for testing. The cycle steps were, by and large, long enough that the touch current reading could be taken however. 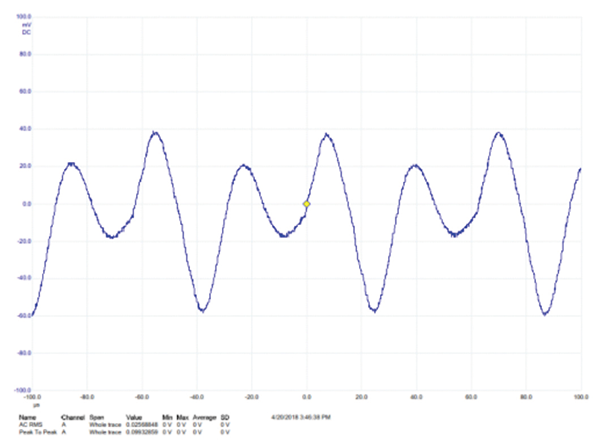 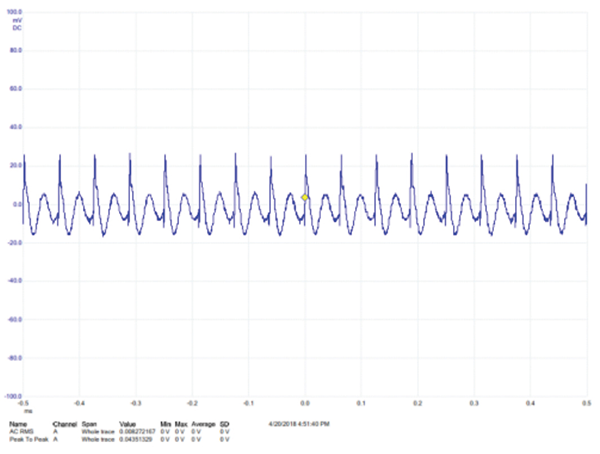 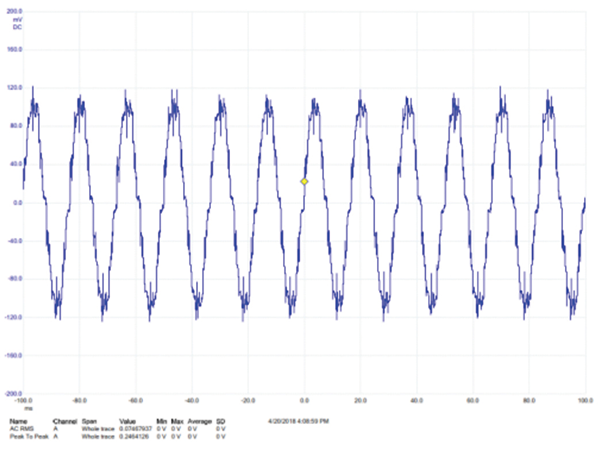 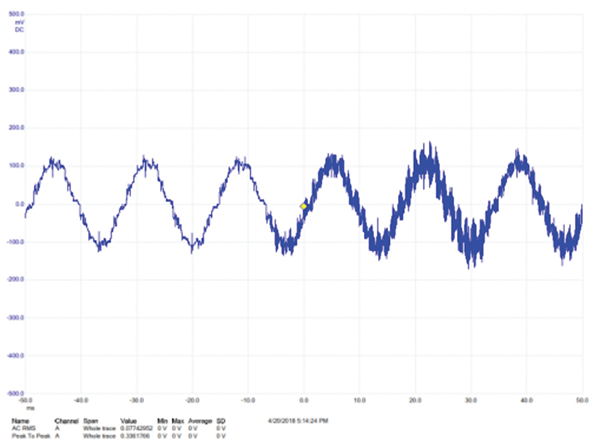 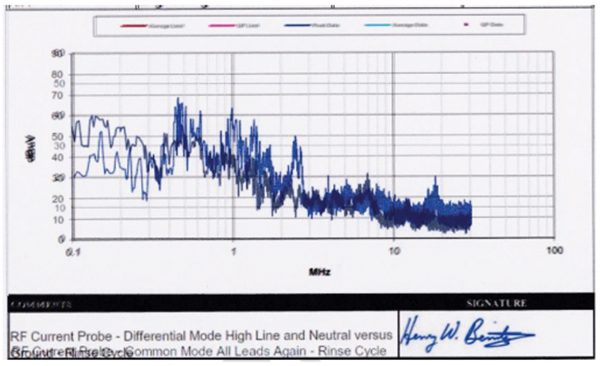 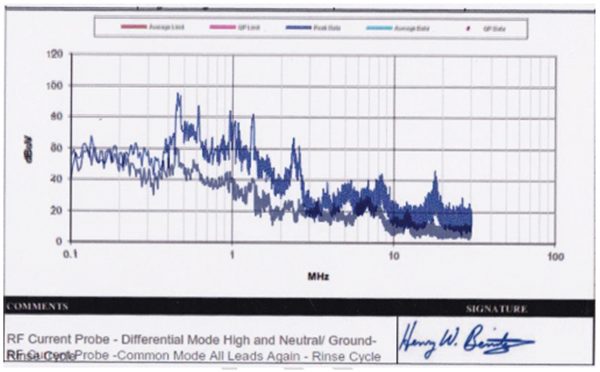 The cases that represented the worst cases were presented earlier.

Figure 11 shows the variation in the touch current as the cycle changes in the machine. The latter part of the trace has considerably more HF content than the earlier cycles.

The point at which these two curves come together represent the point where the differences are disappearing between the two effects.

Both of these units had frequency response similar to the other unit tested, even though some EMI mitigation had been applied.