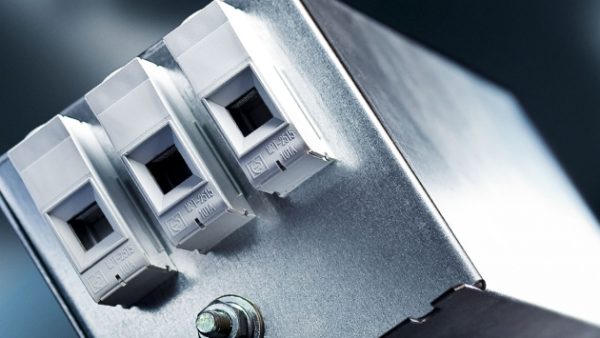 Today’s electrical industrial installations are increasingly being fitted with residual current devices (RCD) to ensure human safety. This is also a requirement in certain countries for 3-phase systems, for example plug-in systems up to 32 A. The RCD limits the current to ground to a maximum of 30 mA. This limitation on the RCD poses a particular problem in drive technology since the frequency inverters that control the engine generate considerable leakage current. Long motor cables further aggravate the problem, since they increase the capacity to ground and thus the currents to ground. The new series of FMBC LL filters helps reduce leakage currents and permits compliance with common EMC standards as an efficient input filter.

The compact FMBC LL 3-phase filters have been designed for currents from 7 A to 180 A at 520 VAC and an ambient temperature of 50 °C; +40 °C at a higher rated current. The leakage current rating for versions 7 – 55A is < 5 mA and <20 mA for versions 75 – 180 A. The FMBC LL series is cURus approved, which makes the filters ideal for use in high-power, industrial systems. Despite their high output performance, they are still compact and lightweight in design.

The standard FMBC LL is fitted with a screw connection. Other types of connections including wires or copper bars are available on request. Custom options to the circuitry are also possible, as well as variations in housing styles. SCHURTER also offers its own EMC measuring service for optimizing the most efficient filter solution for the best system performance.

More information can be found at http://fmbc-ll.schurter.com.