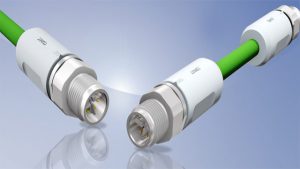 In the light of increasing data volumes in industrial plants, the question arises for designers and planners how data can be transmitted quickly and reliably. With the new M12x1 X-coded, axially overmoulded, CONEC extends the range of CAT 6A-capable connectors by a further high-quality connector.

Thus, it becomes possible to completely map the transmission path from a device installed in the field and the associated processing unit with CONEC connectors.

Typical application areas that require steadily higher data transmission rates are, for example, vision and scanner systems for production monitoring and real-time data evaluation. Entertainment systems in trains, too, which provide the passengers with a reliable Internet connection at the seats and surveillance cameras place high demands on the data transmission and robustness of the connectors.

With the new connector in a compact design, CONEC meets all requirements according to IEC 61076-2-109 and with regard to the electromagnetic compatibility according to CAT 6 A standard up to 500 MHz. The new vibration protection of the coupling screw has been adopted from the X-coded connector with crimp connection. The cylindrical but typical CONEC design of the overmoulding was further developed and prepared for larger cable cross sections. When plugged in, the connector complies with protection class IP67.