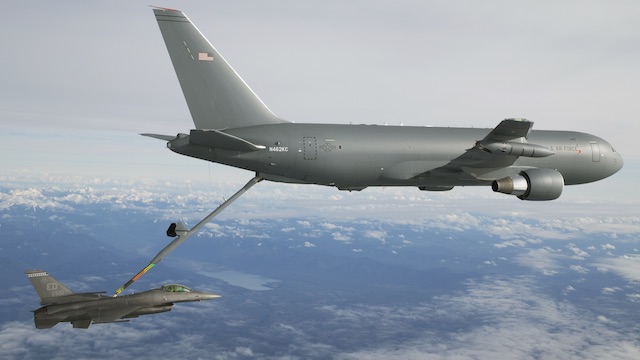 The United States Air Force has successfully created a tanker capable of withstanding electromagnetic pulse weapons. The KC-46A Pegasus proved impervious to an assortment of electromagnetic attacks in a recent test. This new technology will help the military defend itself against one of the fastest-growing types of weapons.

“The KC-46A tanker is protected by various hardening and shielding technologies designed into the aircraft to negate any effects on the aircraft. This successful effort retires one of the key risks on the program.”

Electromagnetic pulses are created by sending an electrical current through a large coil. This creates a brief magnetic field, which can and has been weaponized. The Pegasus was able to withstand a barrage of such attacks from its place on a special landing pad. Additionally, the Pegasus was able to resist electromagnetic pulses while airborne. Not only did the aircraft itself survive the test intact, so did the wing air-refueling pods that were tested as well.

Because of the nature of the technology, specific details on the Pegasus are not being released to the public. At this time, the military feels it is safer to keep this information under wraps. A few pieces of information have been shared, however. According to industry reports, chips built on insulating substrates such as silicon or sapphire have a better chance of withstanding electromagnetic pulses, as opposed to traditional semiconductor chip wafers.

The computational systems used in the Pegasus are markedly different as well. They rely on magneto-resistive random access memory (MRAM) to withstand an electromagnetic attack. MRAM has the added bonus of strengthening the technology against a variety of cyber attacks.

In this new age of rapidly expanding military technology, aircraft must be capable of defending itself from a variety of attacks. Not only must it be able to defend itself against traditional missiles, now it must successfully fend of electromagnetic pulse attacks. The Pegasus, in an assortment of tests, has proven that it is an aircraft that can effectively do both. But before it takes to the sky, it has to pass more flight tests, as well as receive certification from the Federal Aviation Administration. However, Boeing is confident that these hurdles will be overcome sooner rather than later.