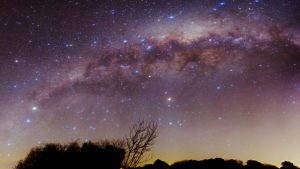 On the 55th anniversary of when Yuri Garin become the first person to journey to outer space, Stephen Hawking joined billionaire Yuri Milner to announce a plan to prove that interstellar travel is possible. (And yes, Milner was named for the famous cosmonaut.) The program, called Breakthrough Starshot, aims to demonstrate proof of concept for tiny light-propelled spacecraft that could reach our nearest star system, Alpha Centauri, in just 20 years. Hawking said:

Earth is a wonderful place, but it might not last forever. Sooner or later, we must look to the stars. Breakthrough Starshot is a very exciting first step on that journey.

The $100 million plan that Milner and Hawking presented involves a mothership that would carry thousands of “nanocrafts,” which are disks filled with microelectronics, including a camera, power source, laser for communication, and photon thrusters for navigation. The nanocrafts would also have a lightsail made of metamamaterials no more than a few hundred atoms thick. Once in orbit, the mothership would release one of these tiny probes each day. On Earth, phased arrays of lasers would send a powerful laser beam into space, where it would push the probes along at incredible speeds. Milner told the Atlantic:

While our fastest spaceship today—New Horizons—would take tens of thousands of years to reach the closest star, Milner says that engineers have estimated that the Starshot system would be so fast that it could get there in just 20 years.

There are, of course, concerns about whether this plan is realistic. A laser as powerful as the one suggested in the plan could easily destroy to anything that gets in its path—possibly even the probes themselves. However, Breakthrough Starshot has an impressive list of supporters. The program will be led by Pete Worden, the former director of NASA AMES Research Center, and advised by a committee of highly-credentialed scientists and engineers. The board will consist of Hawking, Milner, and Mark Zuckerberg. A press release from Milner’s organization explains that the project “brings the Silicon Valley approach to space travel, capitalizing on exponential advances in certain areas of technology since the beginning of the 21st century.”