New Satellite Designed To Fix Other Satellites While In Orbit 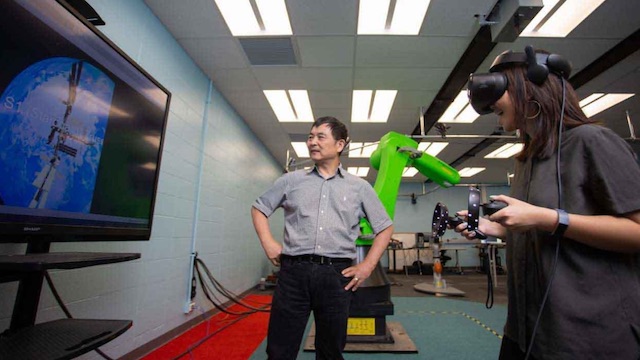 A new type of satellite has been developed that can fix other satellites while they orbit the Earth. Engineers at the University of Cincinnati have created a new type of robotics technology capable of docking with other satellites already in orbit. From there, they could provide necessary repairs or refueling to keep the satellite in top condition. This technology could help reduce the amount of debris that currently circles the planet in the form of damaged satellites, as well as save hundreds of millions of dollars previously wasted on replacing old and broken satellites.

Issues with satellites and their necessary repairs have plagued scientists ever since they started exploring the stars. A single satellite can come in at tens or even hundreds of millions of dollars, and these devices can encounter some extreme terrain as they attempt to reach and maintain orbit around the Earth. The best case scenario often ends with one of the satellites simply running out of gas and getting stuck in orbit.

“You’re retiring a perfectly good satellite because it ran out of gas.”

But engineers at NASA think this new robotic satellite might be the answer to some of these issues. Launching in 2022, the satellite will be sent into low Earth orbit to assist other satellites already circling the planet. Its goal is to intercept a US government satellite and provide it with a refuel. Should the mission prove successful, it will provide proof of concept for autonomous satellite repairs. Along with NASA, the University of Cincinnati is also collaborating with Maxar, a Colorado company that specializes in robotics and spacecraft infrastructure.

Scientists are currently working on automated navigation that will help the satellites to dock with other devices once sent out into space. By using virtual reality technology, engineers and students can create simulations that allow them to predict the behavior of specific satellites, making it easier for the satellite to provide repairs and fueling as needed. Engineers are also hard at work improving the mobility of the satellite, so it can fully function in the three-dimensional world of low orbit. Meanwhile, they will continue to test every aspect of their satellite design in preparation for the 2020 launch.