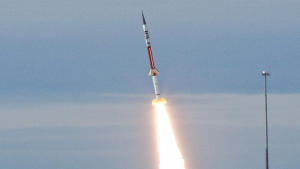 A 3D printer built by 20 engineering students from Virginia Tech will lift off into space in a 900-pound rocket as an experiment to explore how additive manufacturing (a.k.a. 3D printing) withstands a launch and microgravity environment. “In the future as 3D printing develops, we see a lot of benefits to it such as parts replication and repairs in space,” said team leader Sebastian Welsh. “So for example if a part in space breaks on a mission to Mars or the ISS, it takes a lot of time and money to get new parts up to the astronauts, if it’s even possible at all, but if there’s a means to manufacture the part on board the spacecraft it would make repairs a lot easier and potentially help save missions.”

A 3D printer is already on the International Space Station, but the Virginia Tech printer will be the first to be used on an unmanned rocket during flight. The students designed, built, and tested the machine, which will print a plastic “VT” school logo 100 miles above earth. The students faced several challenges when designing a 3D printer for space: it had to compact, weigh less than 30 pounds, and be sturdy enough to endure 20 to 40 times the normal force of gravity while reaching speeds of 3,800 miles per hour during the launch.

Weather permitting, the NASA two-stage Terrier-Improved Malemute suborbital sounding rocket will launch this week from NASA’s Wallops Flight Facility in Virginia. The rocket will spend three minutes in microgravity, while the Virginia Tech printer will use hot-melted plastic at 400 degrees to print its “VT” school logo. Meanwhile, an onboard computer will measure temperature, pressure, and acceleration data, and an HD camera will record the printer in action. The entire 872-pound payload will descend by parachute and then splash down in the Atlantic Ocean 15 minutes after launch.

Later, the students will use microscopic analysis to compare the object that was printed in space to one that was printed on Earth. They will check the printed logos for differences to understand how the printer worked, despite the jarring ride and microgravity environment of suborbital space. The students plan to use what they learn to improve the printer and send it on another flight in the future, potentially with the ability to print multiple materials.

Virginia Tech’s 3D printer is one of seven student-run experiments that will fly aboard the rocket as part of the RockSat-X program, which NASA runs in conjunction with the Colorado Space Grant Consortium. Other university experiments in the payload include an induction heater, a satellite communication system, flexible electronics, and more. Today’s planned launch was scrubbed due to bad weather, but they will try again on August 12. NASA will broadcast the event live on its UStream webpage.