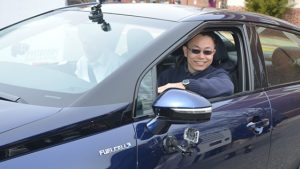 Researcher Yushan Yan, at the wheel of a fuel cell vehicle, is conducting research on the use of nickel as a catalyst in an alkaline electrolyte that promises to bring down the cost of hydrogen fuel cells.

A team of engineers has made a scientific breakthrough that could help entice more people to buy fuel cell vehicles. Stricter federal standards and growing consumer demands for environmentally-friendly cars have made clean technology increasingly popular in the automotive world. However, most consumers are cautious about electric vehicles, which can be expensive to purchase and require planning ahead when charging stations aren’t readily available. Electric vehicles that depend on batteries suffer from short driving ranges and long battery charging times. Fuel cell vehicles, on the other hand, can be charged in five minutes, which is about the same time as it would take to fill a tank of gas. The problem is they are too expensive for most consumers—the Toyota Mirai, for example, sells for $57,500. University of Delaware researcher Yushan Yan says he has found a way to lower the price.

Yan, along with researchers from Delaware and China, say they can lower the price of fuel cells by replacing expensive platinum catalysts with cheaper metals, such as nickel. They found that by switching the operating environment from acid to basic, nickel could perform as well as platinum. The work is documented in a paper published Jan. 14 in Nature Communications.

“This new hydroxide exchange membrane fuel cell can offer high performance at an unprecedented low cost,” Yan says. “Our real hope is that we can put hydroxide exchange membrane fuel cells into cars and make them truly affordable — maybe $23,000 for a Toyota Mirai. Once the cars themselves are more affordable, that will drive development of the infrastructure to support the hydrogen economy.”